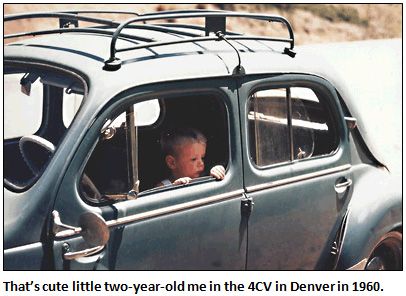 No one is going to care about this post. Too bad. I feel like writing, and on a weekend you take what you can get.

Anyway, I was musing the other day about the fact that I’ve always owned foreign cars. Partly this is just chance, partly the fact that I live in California, and, I suppose, partly because my parents always owned foreign cars. The first one was purchased around the time of my birth, and we kids called it the bye-bye, for reasons I presumably don’t have to explain. It was, as it happens, a Renault. But which Renault?

I did a bit of lazy googling last night, but nothing looked quite right. Then this morning, I noticed one of those Fiat 500s that J-Lo hawks on TV, and thought that it looked a little like the old Renault. Except I was sure the Renault had vents in the rear.

But wait. Rear vents means a rear engine. So I googled that, and instantly got a million hits for the 4CV, which was clearly the old bye-bye. My mother confirmed this telephonically a bit later. And that got me curious. Citroën, of course, produced the iconic 2CV, which first came off the assembly line at about the same time. What’s with that? What’s the appeal of __CV to postwar French auto manufacturers?

The answer turned out to be pretty funky. CV stands for chevaux vapeur, or horsepower. But the 4CV is not a 4-horsepower car. CV, it turns out, is used to mean tax horsepower. After World War II, France (along with other European countries) wanted to encourage people to buy low-power cars, so they put a tax on horsepower. But just taxing horsepower would have been too simple. Instead, they used a formula that took into account the number of cylinders, the piston bore, and the stroke. Here’s the formula for the 4CV:

These numbers were undoubtedly carefully engineered to produce the highest result that would round down to 4. In fact, the 4CV had a whopping 17 horsepower, and could get to 60 mph in just under 40 seconds. Ours had a few wee problems chugging along at 6,000 feet in Flagstaff on the way to Denver in 1960, but what can you expect for 17 horsepower?

So that’s your history lesson for the day. Apparently the French tax the horsepower of cars to this day, though the formula has changed over time. According to Wikipedia, “Since 1998 the taxable power is calculated from the sum of a CO2 emission figure (over 45), and the maximum power output of the engine in kilowatts (over 40) to the power of 1.6.” The power of 1.6? I guess they still love a little pointless complexity in France.