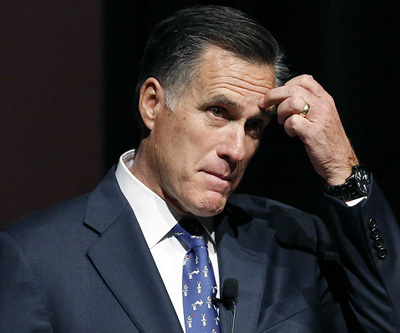 The New York Times has a big story this morning about the trials and tribulations of the Republican Party establishment in their efforts to stop Donald Trump. I would like to draw your attention to two things. First this:

Late last fall, the strategists Alex Castellanos and Gail Gitcho, both presidential campaign veterans, reached out to dozens of the party’s leading donors, including the casino magnate Sheldon Adelson and the hedge-fund manager Paul Singer, with a plan to create a “super PAC” that would take down Mr. Trump….A Trump nomination would not only cause Republicans to lose the presidency, they wrote, “but we also lose the Senate, competitive gubernatorial elections and moderate House Republicans.” No major donors committed to the project, and it was abandoned. No other sustained Stop Trump effort sprang up in its place.

….[Mitt] Romney had been eager to tilt the race, and even called Mr. Christie after he ended his campaign to vent about Mr. Trump and say he must be stopped. On the night of the primary, Mr. Romney was close to endorsing Mr. Rubio himself, people familiar with his deliberations said.

Yet Mr. Romney pulled back, instead telling advisers that he would take on Mr. Trump directly. After a Tuesday night dinner with former campaign aides, during which he expressed a sense of horror at the Republican race, Mr. Romney made a blunt demand Wednesday on Fox News: Mr. Trump must release his tax returns to prove he was not concealing a “bombshell” political vulnerability.

So why didn’t Romney just fund this Super-PAC himself? $10 million would be pocket change for him, and these PACs all know how to keep contributions anonymous if Romney had wanted that. It’s ridiculous that the Republican Party’s many zillionaires have all been unwilling to drop a few megabucks on this effort, and doubly ridiculous that Romney is willing to go public with his “horror” but wasn’t willing to shell out to do something about it. Maybe that’s why he lost the 2012 race.

And there’s also this:

At least two campaigns have drafted plans to overtake Mr. Trump in a brokered convention, and the Senate majority leader, Mitch McConnell of Kentucky, has laid out a plan that would have lawmakers break with Mr. Trump explicitly in a general election.

….While still hopeful that Mr. Rubio might prevail, Mr. McConnell has begun preparing senators for the prospect of a Trump nomination….Mr. McConnell has raised the possibility of treating Mr. Trump’s loss as a given and describing a Republican Senate to voters as a necessary check on a President Hillary Clinton, according to senators at the lunches.

He has reminded colleagues of his own 1996 re-election campaign, when he won comfortably amid President Bill Clinton’s easy re-election. Of Mr. Trump, Mr. McConnell has said, “We’ll drop him like a hot rock,” according to his colleagues.

Mitch McConnell is the ultimate transactional politician. He never bothers with fancy justifications for what he wants to do; he just tells reporters that his goal is stop x or push y because it’s what he wants, and that’s that. It’s almost refreshing in a way.

So if he’s seriously suggesting that Republicans in significant numbers might break with Trump and hand the election to Hillary Clinton, he’s probably serious. He doesn’t play 11-dimensional chess. I’ve been frankly dubious about all the promises I’ve heard from conservatives about abandoning Trump even if he wins the nomination, and I still am. I think most of them will eventually invent some reason to “reluctantly” pull the lever for him thanks to their existential horror of a Hillary Clinton presidency. But who knows? If McConnell is up for it, maybe it’s a more serious possibility than I think.