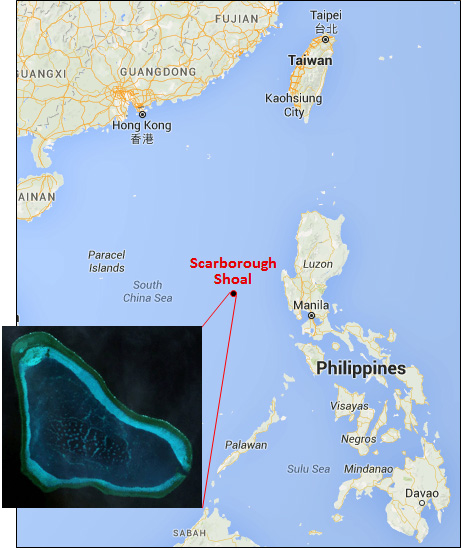 In light of today’s sweeping decision at the Hague denying China’s claim to various islands and reefs in the South China Sea, this is an interesting tidbit from the Financial Times:

US President Barack Obama in March delivered a stark admonition to Xi Jinping over the South China Sea, warning the Chinese leader of serious consequences if China reclaimed land at Scarborough Shoal, one of the most dangerous flashpoints in Asia.

….Following the meeting in Washington, China withdrew its ships from the area….“The signalling from the US side was that this was serious,” said a former official. “There was an accumulation of pieces … the conclusion was that the People’s Liberation Army was advocating [action]. It wasn’t necessarily indicators that Xi himself had made any decisions, but there was the feeling that it was on his desk and coming to him for a decision.”

….China has come under criticism for building man-made islands in recent years, but the US saw Scarborough as more strategically significant given its proximity to the coast of the Philippines, which has a mutual defence treaty with the US. Some officials worried that China could install radar and missiles on Scarborough. Along with facilities in the Paracel and Spratly Islands, that would help China create a strategic triangle, which would enable the policing of any air defence identification zone in the South China Sea.

At the moment, China reclaims land at various spots in the South China Sea, and everyone complains but nobody does anything about it. Likewise, we operate reconnaissance flights and perform Freedom of Navigation exercises, and China complains but doesn’t do anything about it. Basically, both sides can do whatever they want because neither side wants to start a war over it. This pretty obviously favors China at the moment, since they have the resources for large-scale reclamation projects and just enough of a navy to protect them. We have a considerably bigger navy, but it’s unlikely the American public would show much support for a shooting war with China to protect a rock out in the middle of nowhere. All China really has to do is wait a while for us to get bored, and then keep on building.