Here is David Lauter in the LA Times this morning:

In this election season of discontent, a lot of voters are having trouble committing. Around 1 in 5 voters nationwide report themselves as undecided or flirting with third-party candidates, with the exact share depending on the poll and how the question is asked.

That’s far higher than in the past several elections, where fewer than 1 in 10 voters were still up in the air at this point, and reflects the distaste that large numbers of voters have for both Hillary Clinton and Donald Trump….“I’m just lost,” Joanna Gianforcaro, 26, said on a recent 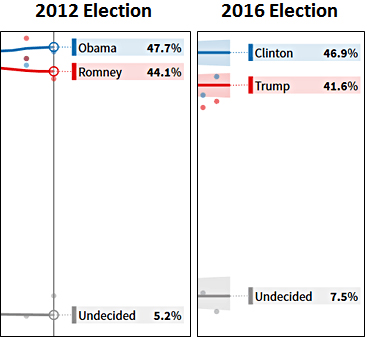 afternoon as she sat with her mother at a farmers market in Doylestown, Pa., a swing area in a potentially important battleground state.

Is this really true? Barely. If you compare apples to apples by using Pollster aggregates for both 2012 and 2016, you find that as of September 8, the undecided vote is 7.5 percent this year vs. 5.2 percent in 2012. This is not really a noteworthy difference, but it drives the framing for the rest of the story. Very strange. There’s more than enough stuff to write about this election without having to resort to made-up stats like this.