Over at the Corner, Patrick Brennan suggests that political journalists are lousy at fact checking, and debate moderators shouldn’t try to do it in real time. There’s a case to be made for this, but he sure picks a weird example:

Liberal Twitter was all a-huff about how the [debate] commissioner cites the unemployment rate as an area where the facts are up for debate — har har, they say, you know there literally is an official unemployment rate the government publishes, right?

Except anyone smart saying this is being remarkably coy: People of good faith and serious economic training debate about whether the “official” unemployment rate is a good representation of the unemployment rate all the time!

How absurd is it to complain about the commissioner’s statement here? Say Trump says something along the lines of “the real unemployment rate is much higher than the government tells you.”

This might well be true — although it all depends on what you mean by the real unemployment rate….The people braying for fact-checking in debates are thus asking for moderators to attempt, in real time, to adjudicate disputes that divide Ph.D. economists and of course, a whole range of other such disputes on which the respective experts — trade economists, classification experts, presidential historians, whatever — often don’t agree.

Brennan suggests this is all a high-minded argument about U3 vs. U6 and the declining labor force participation rate and so forth. Silly liberals! Who are they to say that the unemployment rate is a clear fact when even professional economists argue about it?

And, sure, fair point—if this is what Trump was talking about. He’s not. He’s said on multiple occasions that the unemployment rate is “really” 42 percent or 21 percent or 35 percent. The headline figure from the BLS (currently 4.9 percent) is a “hoax” and a “conspiracy.” In fact, it’s “one of the biggest hoaxes in politics.” This is presumably because Donald Trump doesn’t waste his time with anything other than the very best hoaxes.

This is not an academic argument about what unemployment “really” is. It’s idiocy. It’s a lie. It’s a shameless extension of Trump’s juvenile populism, and Brennan knows it. If he thinks debate moderators shouldn’t even push back on something this rank, he’s showing a contempt for the truth every bit as casual as Trump’s. 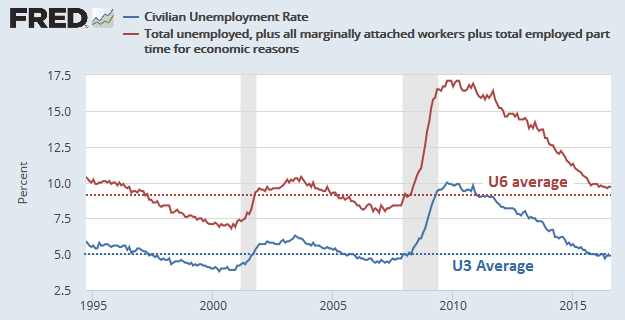