The Wall Street Journal reports that Donald Trump is doing especially well in places where white majorities are dwindling:

Small towns in the Midwest have diversified more quickly than almost any part of the U.S. since the start of an immigration wave at the beginning of this century. The resulting cultural changes appear to be moving the political needle.

That shift helps explain the emergence of Republican presidential nominee Donald J. Trump as a political force, and signals that tensions over immigration will likely outlive his candidacy….Mr. Trump won about 71% of sizable counties nationwide during the Republican presidential primaries. He took 73% of those where diversity at least doubled since 2000, and 80% of those where the diversity index rose at least 150%, the Journal’s analysis found.

Hmmm. I’m no political scientist, but I play one on the internet—and 71 percent vs. 73 percent sure doesn’t sound like a very substantial effect to me. Trump’s 80 percent win rate in counties where diversity rose by 150 percent is slightly more impressive, but the sample size is pretty low. Here’s the diversity map: 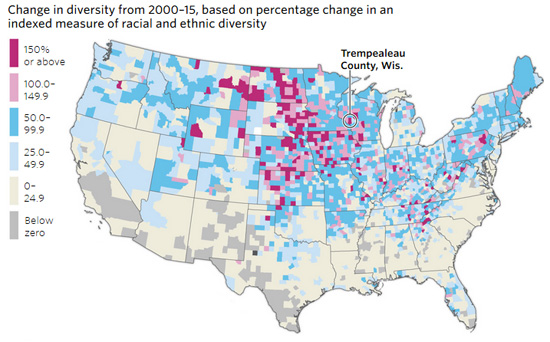 The Journal identifies a “distinct cluster of Midwestern states—Iowa, Indiana, Wisconsin, Illinois and Minnesota” that saw the fastest influx of nonwhite residents. So let’s take a look at who those states supported in the Republican primaries: 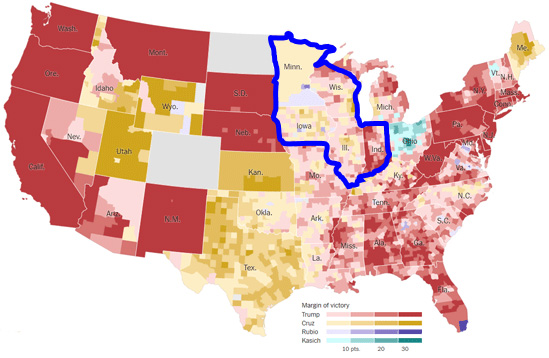 That sure doesn’t look like a region where Trump kicked any special ass. In fact, aside from his home territory in the mid-Atlantic states, he did best in the South, which has seen virtually no change in diversity according to the Journal’s map. White folks there have been living among nonwhites for a long time, and they were completely in love with Trump.

I wonder what accounts for that? Economic anxiety, perhaps?

Unemployment is actually lower in rapidly diversifying counties than in the country on the whole, a sign that concerns over lost jobs are weighing less on voters in these areas….Craig Williams, chairman of the Carroll County Republican Party, said it is the lawlessness of illegal immigration that bothers residents. “People talk about immigration as if we’re a bunch of racists,” he said. “Do we have laws, or do we not have laws? If we’re just going to ignore them, then what’s the point?”