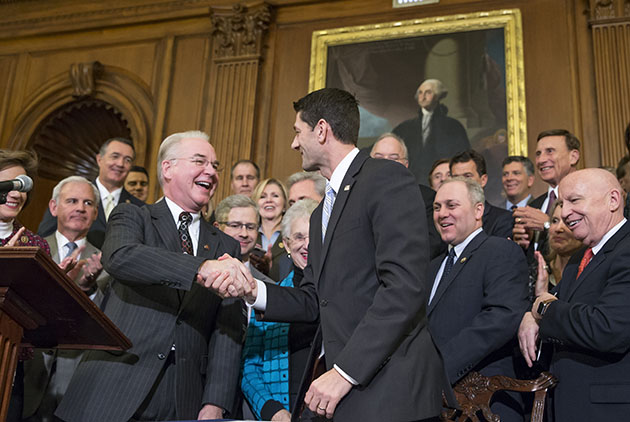 The Washington Post tells us this morning that we have another new member of the incoming cabinet:

However, there is something different about Price: he actually has a replacement plan. Not a white paper, but actual legislation. Sarah Kliff runs down Price’s plan here, but I want to pull back from the details and focus on the bigger picture instead.

You’ve probably heard a million times that Obamacare relies on a three-legged stool. If you want universal coverage, you have to require insurers to cover everyone, even those with pre-existing conditions. That’s guaranteed issue. But that will wreck the insurance pool: it will have too many sick people, who will rush to buy coverage, and not enough healthy people. So you also need to provide an incentive for healthy people to join your plan. In Obamacare, that’s the tax penalty for going without insurance. Finally, once you’ve done that, you have to provide financial help for the poor, since they can’t afford full-price coverage no matter how much incentive you give them. In Obamacare, that’s the subsidies.

This is not just an Obamacare thing. It’s true of all health insurance. Take the employer market that most of us are familiar with. Everyone who works for a company that offers health coverage gets it. That’s guaranteed issue. It’s pretty cheap and the price is deducted painlessly from your paycheck. That’s an incentive for everyone to join. And the company provides the insurance either free or at a very discounted price. That’s the equivalent of Obamacare’s subsidies.

So how does Price’s plan work? He mandates that insurance companies cover even those with pre-existing conditions. That’s guaranteed issue. However, insurers are only required to take you on if you maintain continuous coverage. That’s a huge incentive for healthy people to buy insurance, since if you skip it for a year you might not be able to get coverage if you get sick. Finally, Price offers tax credits based on age to everyone, and a high-risk pool for those who still can’t afford insurance. That’s very similar to Obamacare’s subsidies.

So what’s the problem? Why shouldn’t Democrats ditch Obamacare and accept Price’s substitute? Or to flip things around, why should Republicans bother with this? If they’re just going to get a different version of Obamacare from Price, why not skip the whole thing?

Partly, the answer is in the details. There are lots of moving parts beyond the three-legged stool, and Price’s plan has different details than Obamacare. But mainly, 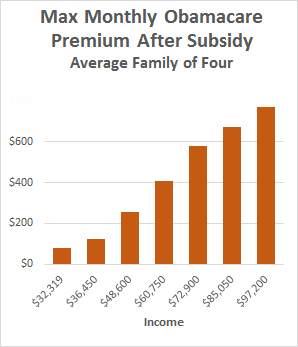 the answer is money. Obamacare works because it’s reasonably well funded, to the tune of about a trillion dollars over ten years. Price’s plan might very well work too if it were funded at the same level.

But it’s not. The CBO has never scored Price’s plan, but even a quick glance tells you that its funding level is a small fraction of Obamacare’s. And as we all know, perhaps the biggest problem with Obamacare is that it’s already underfunded. There are lots of people who struggle to afford insurance even with the subsidies, and plenty more who don’t qualify for subsidies at all. And deductibles are often so high that they make the insurance close to worthless anyway.

Price’s plan is far stingier. He offers tax credits based on age: about $100 per month for young adults, rising to $250 per month for older adults. Since insurance worth the name costs far more than that, it will be wildly unaffordable to anyone who’s not middle class or better.

But it gets worse. Since Price offers credits based on age, it means that the well-off all get tax credits. Many of the poor, who can’t afford insurance even with the tax credits, will go uninsured and therefore get nothing. In other words, his plan is basically a way of subsidizing the rich and screwing the poor. What’s more, since it costs a lot less than Obamacare, it opens up budget room to enact Paul Ryan’s big tax cuts for the rich.

This is unsurprising, of course. Tax cuts for the rich and benefit cuts for the poor is what Republicans do.1 The main reason for repealing Obamacare is to reduce spending so that Republicans can cut taxes, which means that any plan that costs as much as Obamacare doesn’t really do them any good. They have no choice but to accept the three-legged stool, but they can fund it so pitifully that it doesn’t do anybody much good.

And that’s the nut of the whole thing. Details aside,2 Price’s plan is plausibly workable if it’s funded properly. But Republicans will never agree to that. After all, it’s the one thing they actually care about.

1Did I mention that Price’s plan also eliminates Obama’s Medicaid expansion for the very poorest? It does. But you probably guessed that already.

2I’m not trying to slight the details, by the way. A lot of them are really important. But funding is still the key issue.