The Washington Post has a big article up tonight about military waste:

The Pentagon has buried an internal study that exposed $125 billion in administrative waste in its business operations amid fears Congress would use the findings as an excuse to slash the defense budget, according to interviews and confidential memos obtained by The Washington Post….The report, issued in January 2015, identified “a clear path” for the Defense Department to save $125 billion over five years. The plan would not have required layoffs of civil servants or reductions in military personnel.

Hmmm. I have some doubts about this. For starters, that $125 billion is over five years. That comes to $25 billon per year, or about 4 percent of the defense budget. That’s not peanuts, but it hardly seems big enough to represent “far more wasteful spending than expected,” as the article says.

But that’s not the main thing that makes me skeptical about this. My big problem is that this is a McKinsey report, and I have a fairly cynical view of McKinsey-driven “process improvement” blather. For example, the report suggests that the Pentagon can save loads of money by increasing its back-office productivity by 4-8 percent per year. “Private sector industries commonly show similar gains,” they say merrily, so why not the Pentagon?

This is exactly the kind of thing that gives business consultants a bad name. Do private sector businesses really show routine annual productivity gains like this in their back-office operations? I doubt it very much. And even if they do, can the federal government do the same things that private industry does? Hard to say. In any case, it turns out that McKinsey’s biggest finding is that the Pentagon is spending more on its contracts than it should. Here’s how they propose to fix this:

The buzzword-to-reality ratio here is astronomical. I could have written this without knowing a thing about Pentagon procurement. Here’s the McKinsey timeline: 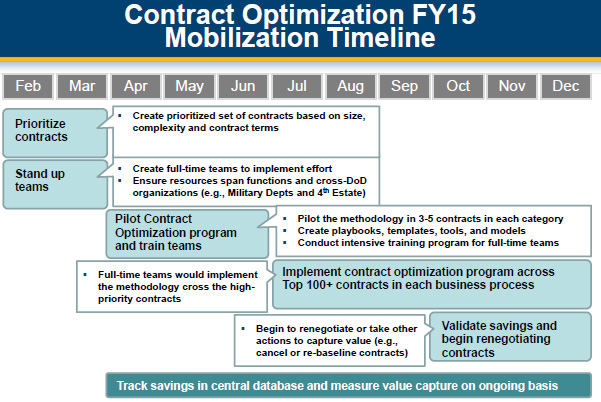 Seriously? They think the Pentagon can massively transform its entire procurement process in eight months, at which point, they blandly say, it’s time to “Validate savings and begin renegotiating contracts”? That’s insane. I used to work for a pretty well-run private-sector company with 200 employees, and I don’t think we could have done this in eight months. Hell, later on McKinsey even admits that “only about 17% of fundamental change projects deliver their full potential.” But they blithely recommend full steam ahead anyway, because success will come with:

This is cribbed out of a book you can buy at Barnes & Noble for $29.95, and it basically describes the platonic ideal of a corporation. No one ever has all this stuff, and certainly not a gigantic federal bureaucracy. And that’s not all. There’s much, much more biz blather, but I won’t bother trying to summarize it. I’ll just show you a few slides: 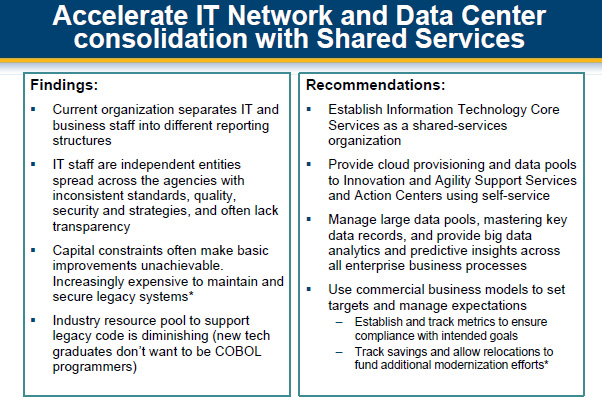 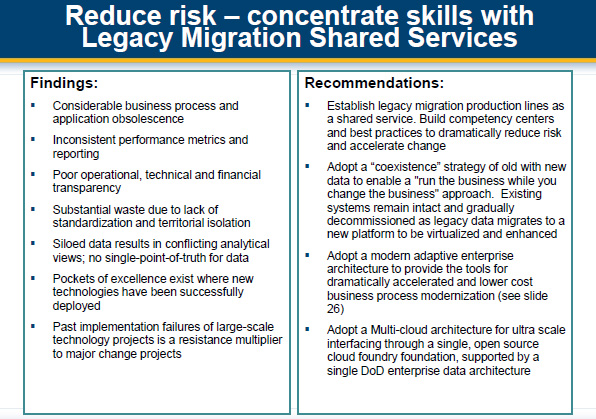 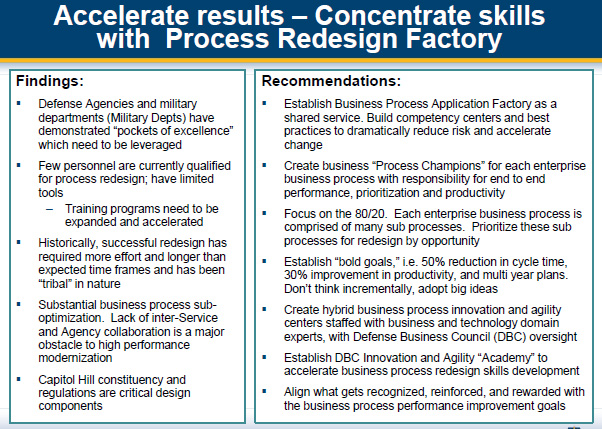 McKinsey wants DoD to establish core IT as “a shared-services organization.” This might be a good idea, or it might not. But it’s straight out of a textbook, and it’s something that takes years to do decently—assuming it’s a good idea in the first place. Would it save money in the long run? Maybe, but I wouldn’t bet on it.

And don’t even get me started on the “Process Redesign Factory.” Holy crap.

So why did the study get scrapped? Here is Deputy Defense Secretary Robert O. Work, who ordered it in the first place:

In an interview with The Post, he did not dispute the board’s findings about the size or scope of the bureaucracy. But he dismissed the $125 billion savings proposal as “unrealistic” and said the business executives had failed to grasp basic obstacles to restructuring the public sector….Work said the board fundamentally misunderstood how difficult it is to eliminate federal civil service jobs — members of Congress, he added, love having them in their districts — or to renegotiate defense contracts.

Normally this would sound like defensiveness from someone who was set in their ways and just didn’t want anything to change. But this guy wanted McKinsey to come in. He simply concluded that their report was shallow and uninformed, and I can’t say I disagree. The Powerpoint deck looks like it’s little more than boilerplate that’s lightly massaged by a 22-year-old “senior analyst” for each client.

I can sympathize with anyone who thinks the Pentagon could make its back-office operations more efficient, but can’t do it thanks to bureaucratic inertia. I don’t doubt for a second that this is true. But if you want to change this, you’d better do more than bring in a few McKinsey suits to provide you with the exact same recommendations they provide to everyone else, using the exact same swarm of buzzwords. This report sounds like dreck.