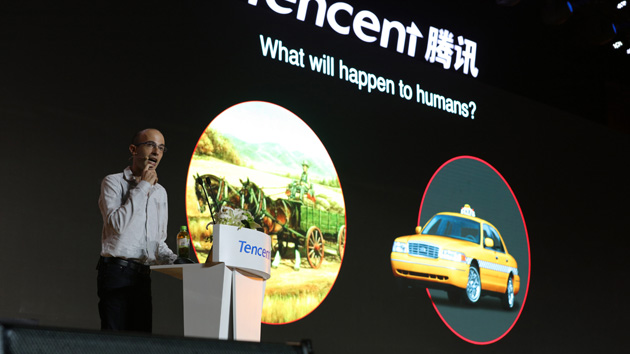 Those still a thing? I mean, I know they are, but around me the 3 major supermarkets within walking distance got rid of them….Anyway, I know they still exist, but I do think our robot future is not quite as inevitable as people think. Worrying about the impact of future automation on jobs seems to be a cool tech away of ignoring the current fucked and bullshit jobs situation. And, yes, automation has been going on for decades, which is actually my point. There’s nothing new about it, and I don’t know why people think there will be this sudden automation discontinuity. The robots have been here for awhile, and they aren’t really going away, but that doesn’t mean the sci-fi dystopian workless future is just around the corner. Shit is fucked up and bullshit enough without worrying about things which haven’t happened yet, and likely won’t.

It really doesn’t matter if artificial intelligence is distracting us from whatever you think the “real” problem is. It’s coming anyway. The speed of the AI revolution depends solely on fundamental factors (mostly continued reductions in the cost of parallel computing power) and the level of interest in AI software development. The fundamental factors are obviously still barreling ahead, and it sure looks like the free market has a ton of interest too: 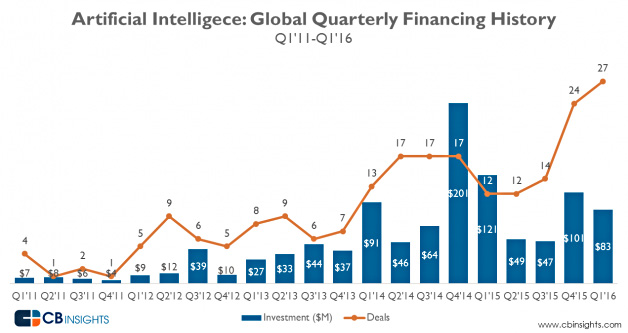 Besides, AI is the real problem. As we all know (don’t we?), the decline of manufacturing in the US has far more to do with automation than with trade or globalization. That decline set up the conditions for an angry working class in three Midwestern states that finally decided it had found a savior in a guy who claimed it was all the fault of a bunch of foreigners. So now Donald Trump is president. How much more real can you get?

And that was just old-fashioned dumb automation. Smart automation is going to have a far bigger and far faster effect. We’re not very far off from the first real destruction of an industry (probably long-haul trucking) thanks to smart automation, and after that it’s going to come thick and fast.

So what are we going to do? Will our future be in the hands of demagogues who gain power by lashing out at scapegoats while they work hard to make sure that rich people get all the benefits of AI? Or will it be in the hands of people who actually give a damn about the working class and understand that a world of increasing automation requires a dramatic rethink of basic economics? I would sure like it to be the latter.

Is AI coming soon? I find this question too boring to spend much time on anymore. Of course it’s coming soon. The only question I’m interested in is what we’re going to do about it. I keep pondering this, and I keep failing to come up with any likely answers that are very optimistic in the medium term. Maybe I’m not thinking outside the box enough. But it sure looks like we’re determined to keep our collective heads in the sand for a long time. At best, the result is going to be a grim future of plutocracy for some and the dole for everyone else. At worst, it’s going to be a future of global genocide (do you think there’s enough aid in the world to keep Bangladesh afloat when there’s no longer any work there?).

Eventually everything will work out, probably after a lot of suffering and a popular revolt. But wouldn’t it be nice to avoid all that?

Oh, and those self-checkout machines? I don’t know about Philly, but there’s hardly a supermarket within ten miles of me that doesn’t have them. Not only are they still a thing, but they’re only going to get better. So sorry about all those nice union jobs as checkers and baggers.