Daniel Gross has some advice for the free-market titans in the homebuilding industry who are facing a shortage of willing American workers:

What’s mystifying here is the fact that capitalist homebuilders and their cheerleaders at the Journal are, well, mystified over why Americans don’t seem to want to work construction. There’s a simple reason why Americans aren’t filling construction jobs—and the construction industry appears to be missing it.

Free-market types will tell you that there’s no such thing as a shortage of a commodity—of energy, of food, and, theoretically, of labor. Rather, there is only a shortage of the proper incentives, people willing to pay the appropriate prices or to send the signals that a commercial endeavor is worth undertaking….And yet the market sharpies collectively are throwing up their hands over the construction labor shortage instead of homing in on the obvious solution: Pay people more—a lot more if need be.

Let’s roll the tape. Has the construction industry tried this novel approach? 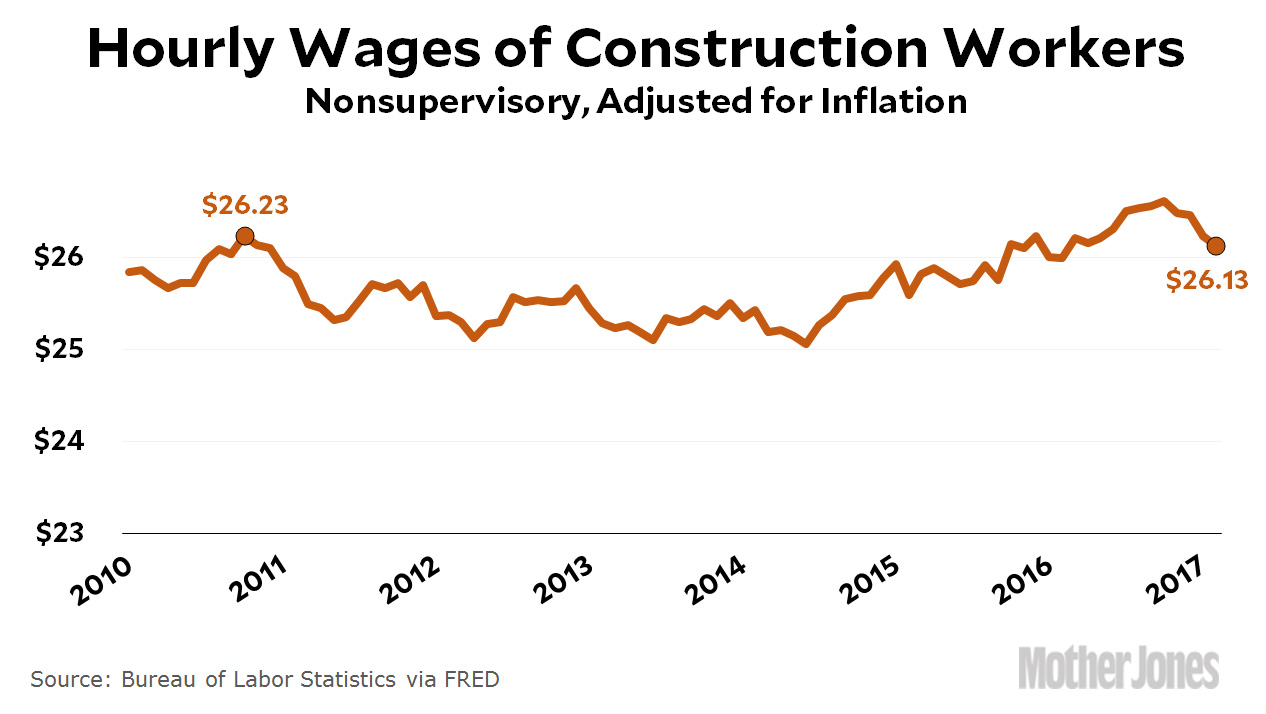 Starting in 2014, construction wages did indeed go up after falling for four years. But by the end of 2016, having barely made up the earlier decline, homebuilders gave up on this exercise in experimental economics. Wages have dropped 2 percent since October even though the construction industry is apparently still facing a labor shortage. They’re now paying wages lower than they did in 2010.

Paying more isn’t always an option. In the agriculture industry, for example, there’s a point at which paying higher wages to field workers makes your produce uncompetitive. It can’t compete with lower-priced fruits and vegetables from Chile and Mexico. It’s not clear where that point is, but it’s somewhere.

But homebuilding is a nontradeable sector. You don’t have to worry about foreign competition. At some point, it’s true, your costs might go up so much that your homes are too expensive and people won’t buy them, but that’s a long way off. A few dollars-per-hour in labor costs doesn’t add enough to the price of a house to make a noticeable difference. Besides, if there’s a shortage of labor, then there’s a shortage of new houses, and you can price your houses higher.

So don’t give up, homebuilders! Your experiment would have worked if only you’d kept at it. Start paying your workers $28 or $29 per hour and they’ll come flocking.