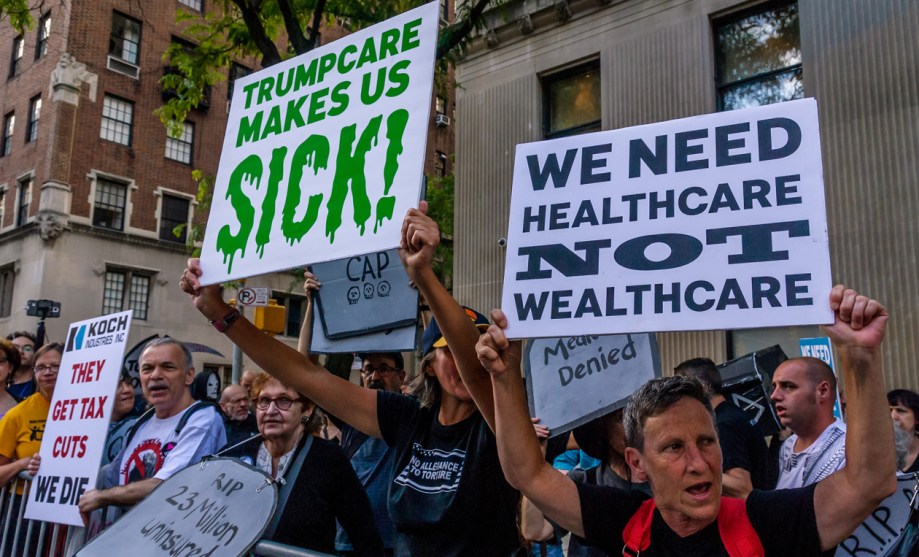 Two more Senate Republicans have declared their opposition to the latest effort to overhaul the nation’s health-care system, leaving the measure without sufficient support to pass and potentially ending a months-long effort to make good on a longstanding GOP campaign promise.

Sens. Mike Lee (R-Utah) and Jerry Moran (R-Kan.) issued statements declaring that they would not vote for the revamped measure….The two conservatives timed the release of their statements and made clear that modest tinkering around the edges of the legislation drafted by Majority Leader Mitch McConnell (R-Ky.) would be insufficient to meet their demands.

This leaves only 48 senators who support the bill. Lee and Moran joined Susan Collins and Rand Paul in “calling for a long process of completely redrawing the legislation that would take months and months.”

Of the four Senate rebels, only one is a Republican moderate who thinks Trumpcare is too harsh. The other three are hardliners who think Trumpcare doesn’t go far enough in repealing Obamacare and cutting back Medicaid.

So now what? Is Trumpcare dead for good? Or will Mitch McConnell be willing to spend the rest of the year trying to come up with a brand new health care plan while Trump himself dawdles around doing nothing? My guess is that it’s dead for good. The rest of 2017 will be spent on the budget and tax reform, and nobody is going to want to take up health care again during an election year.

UPDATE: President Trump has weighed in, via Twitter of course:

Republicans should just REPEAL failing ObamaCare now & work on a new Healthcare Plan that will start from a clean slate. Dems will join in!

I have two comments. First, Congress can’t repeal Obamacare. They can repeal parts of it, but the parts that are left would destroy the insurance industry. Second, Democrats will not join in if Republicans decide to do this anyway.

Of course, if Trump is serious about actually fixing the problems with Obamacare and truly making it better, Dems would be happy to join in. But Republicans have made it crystal clear that they have no interest in that.

Remember: this bill failed because even though it took away health coverage from 22 million low-income people, it wasn’t harsh enough toward the poor. This is what the modern Republican Party has become.