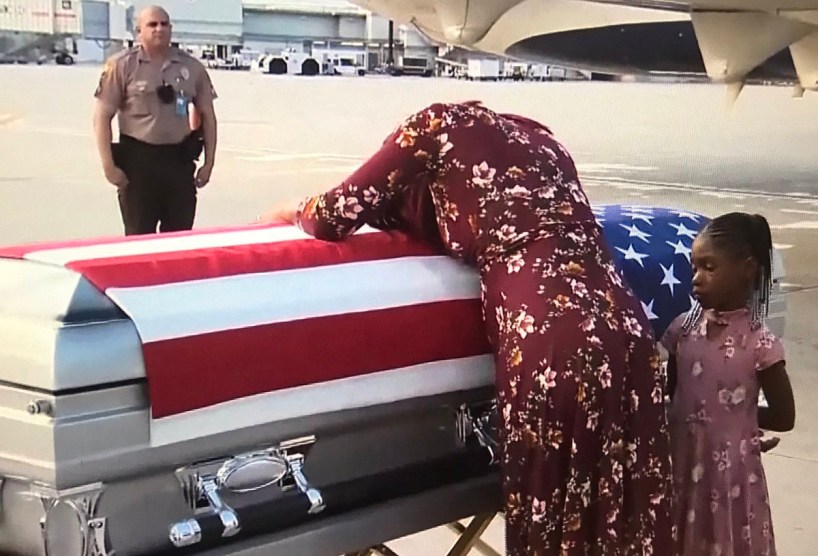 This whole row over Donald Trump’s condolence call to Myeshia Johnson is, possibly, the most Trumpian controversy ever. I was inclined to ignore it at first, since Trump’s actual conversation with Johnson didn’t strike me as all that bad. The fact that he was apparently winging it on the call is typical Trump, but a non-hostile reading of what he said suggested to me that he expressed himself a little poorly but nothing much more.

But he couldn’t just leave it at that, could he? Of course not. He’s Donald Trump. So he blurted out something about Obama and other presidents not making condolence calls. This is a typical off-the-cuff Trump lie: something vaguely plausible that he invents on the spot to defend himself. Naturally, it prompted the press to check into this, and they reported that Trump was lying. They also uncovered the fact that he had promised $25,000 to a father he had called but had never delivered it. Then, instead of leaving bad enough alone, he decided to call congresswoman Rep. Frederica Wilson a liar, even though her account of the call to Myeshia Johnson was perfectly correct.

Then, because everyone close to Trump eventually pays a price, Trump roped chief of staff John Kelly into the whole thing, claiming that Obama never called Kelly when Kelly’s son was killed in Afghanistan. Kelly was then forced to offer a self-indulgent attack on everyone, and especially on Rep. Wilson, who he said had acted badly at a building dedication in 2015. Video of the event showed that Wilson had done none of the things Kelly said. Was he lying? Did he just misremember? Who knows.

But naturally no one backed down. That’s verboten in Trumpland, even in the face of video evidence. So of course Sarah Huckabee Sanders defended Kelly, saying that it was all but unpatriotic to even question the word of a 4-star Marine general.

The key thing here is that all of this was completely avoidable. All of it. Trump just had to provide a vague answer to the condolence call question on Monday and none of this would have happened. It’s 100 percent a result of the fact that Trump can’t abide even the tiniest hint of criticism and apparently has no control over his own response. No matter how dumb and self-destructive it is, he will automatically lash out and then continue to escalate things forever. Quite aside from his political beliefs, it’s yet another confirmation that Trump is simply a terrible human being.

For now, the only result is the character assassination of a congresswoman and the descent into the muck of Trump’s chief of staff. It’s horrible, but we’ll all live through it. Next time, however, we might not be so lucky.