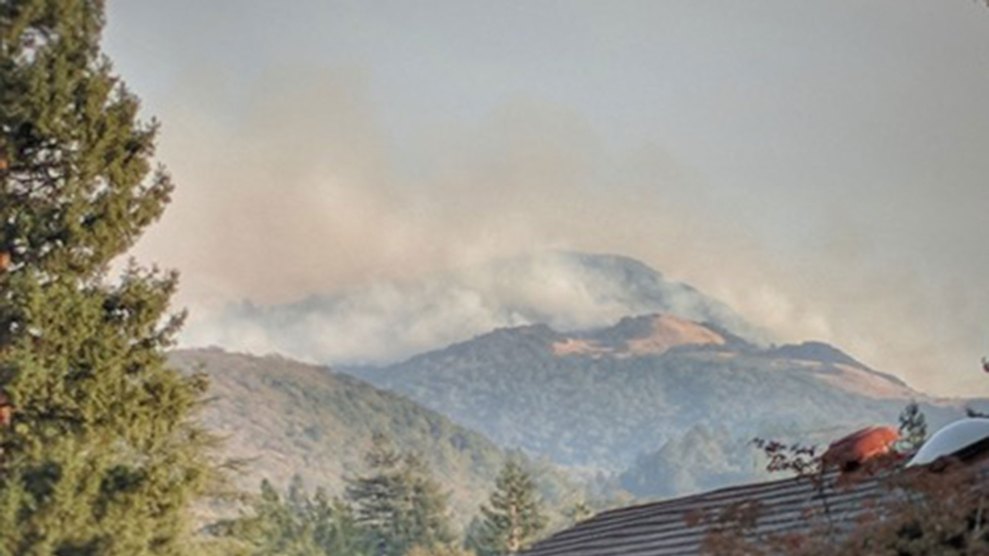 Annadel State Park in Santa Rosa is probably Sonoma County’s most beloved and well-used park. I’ve hiked and mountain biked countless miles on its many trails. So it’s deeply distressing to see it on fire from the Nuns Fire, to imagine the wildlife trying to flee up there. It’s even more alarming to see the hundreds of homes in its shadow, which have now been evacuated.

Most of the park, including its highest point, Bennett Mountain, is actively on fire and neighborhoods all around it have been evacuated. Some have already burned.

This street is one of the most popular trailheads into Annadel State Park. On an otherwise beautiful day like today it would be packed with cars as people jog, mountain bike, hike, and ride their horses up the trails. Now it’s deserted, the entire neighborhood under a mandatory evacuation order.

Some of the people who fled the fires in Santa Rosa Sunday night and Monday morning are now living in the evacuation center at the Sonoma County Fairgrounds. It’s a large and soulless space where there’s little do do but sort through donated clothes for something to wear and wait in line for a meal from the food trucks outside.

The elderly and those in need of medical attention are living in an area partially screened off from the rest of the building. It’s safe and there’s a modicum of privacy, but it’s pretty depressing. I can feel the free-floating anxiety in the air.

Everyone else is jammed into cots equipped with a thin pillow and one small blanket. I came here with pillows and blankets to donate—and I left them in mounds of stuff outside—but I realize they’re not going to make it into the sterile confines of the Red Cross world. Maybe they’ll go to people when they begin to repopulate the burned out areas.

The Sonoma County Fairgrounds are close to Annadel Park—and the Nuns Fire. Now the winds are kicking up sharply, rising towards predicted gusts of 50 mph in the mountains this afternoon, tonight, and tomorrow. Skies are getting much smokier. Ash is falling. I can’t help but worry that the evacuees at the fairground are going to need to evacuate again.