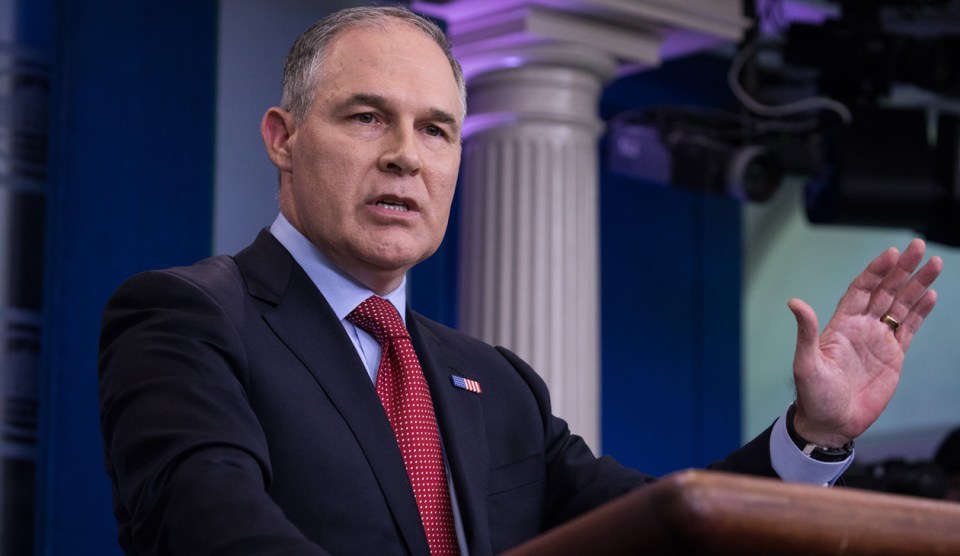 The Washington Post puts some numbers to a story that we’ve known for a while: EPA director Scott Pruitt flies first class a lot. He also has a much bigger security detail than most heads of cabinet-level agencies:

On Monday, June 5, accompanied by his personal security detail, Pruitt settled into his $1,641.43 first-class seat for a short flight from the District to New York City….Raced to New York on a military jet, at a cost of $36,068.50, to catch a plane to Rome….Met with papal officials, business executives and legal experts…cost at least $90,000….That figure does not account for the costs of Pruitt’s round-the-clock security detail, which have not been disclosed.

….In an interview Friday, Bowman said the agency doesn’t release Pruitt’s schedule in advance “due to security concerns” and because it could be a “distraction” from the trips….The agency records show that wherever Pruitt’s schedule takes him, he often flies first or business class, citing unspecified security concerns. The EPA’s assistant inspector general for investigations told The Post in September that Pruitt has gotten a higher number of threats than his recent predecessors.

….“It is acutely paranoid,” Schaeffer said of the EPA’s refusal to disclose Pruitt’s whereabouts on any given day….Last week, for instance, Pruitt surfaced in Florida, to the surprise of reporters who cover the EPA and even media outlets in the state. An official said the agency notified some local and national outlets. The EPA has also declined at times to confirm in advance Pruitt’s speaking engagements to various industry and political groups.

Personally, I wouldn’t really have a problem if cabinet-level officials were allowed to travel business or first class. Rank hath its privileges and all that. But the security stuff is crackers. Does Pruitt just like the status of having a bunch of security guys around at all times? Is he truly paranoid that someone might want to assassinate the head of the EPA? Does he keep his trips secret because he doesn’t want the press around, or to reduce the chances of being assassinated? Did he insist on all this stuff back when he was just a minor state official in Oklahoma?

What the hell is up with this guy?