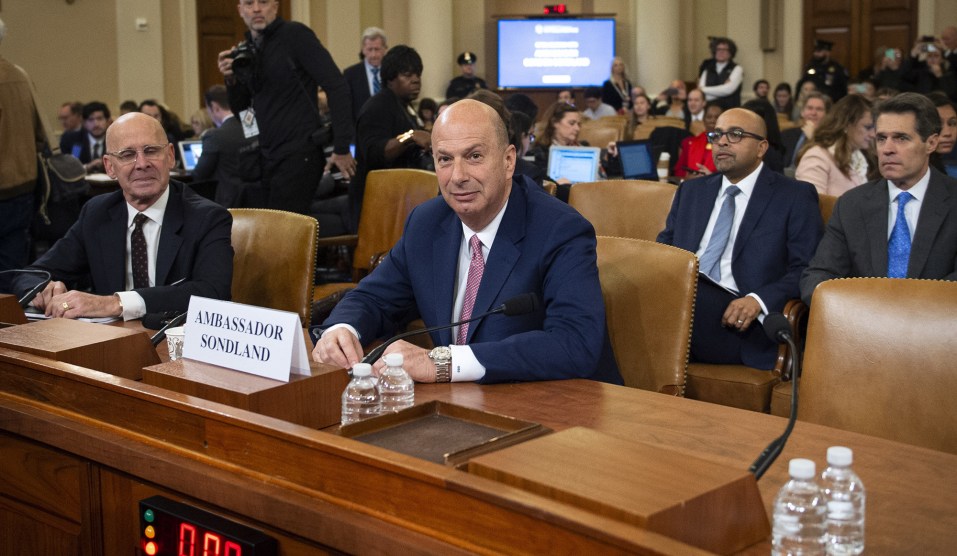 It appears that Gordon Sondland has decided that he doesn’t want to stand trial for perjury after all:

Gordon D. Sondland, the Republican megadonor turned ambassador to the European Union, told the House Intelligence Committee on Wednesday that he and other advisers to President Trump pressured Ukraine to investigate Democrats “because the president directed us to do so.”

….“Secretary Perry, Ambassador Volker and I worked with Mr. Rudy Giuliani on Ukraine matters at the express direction of the president of the United States,” Mr. Sondland told the committee. “We did not want to work with Mr. Giuliani. Simply put, we were playing the hand we were dealt.” With no alternative, he said, “we followed the president’s orders.”

Mr. Sondland confirmed what has already been known, that there was a clear “quid pro quo” linking a coveted White House meeting for Ukraine’s president to the investigations Mr. Trump wanted. And he said he was concerned about “a potential quid pro quo” linking $391 million in security aid that Mr. Trump suspended to the investigations he desired.

I’m not sure how many people have to testify about this before it becomes a simple fact, but it’s obviously a simple fact. Donald Trump wanted a public announcement that Burisma and the Bidens were being investigated, and only then would he release Ukraine’s military aid and agree to a White House meeting with Ukraine’s president. He tried to leverage American foreign policy for personal gain, and that’s about as impeachable as it gets.