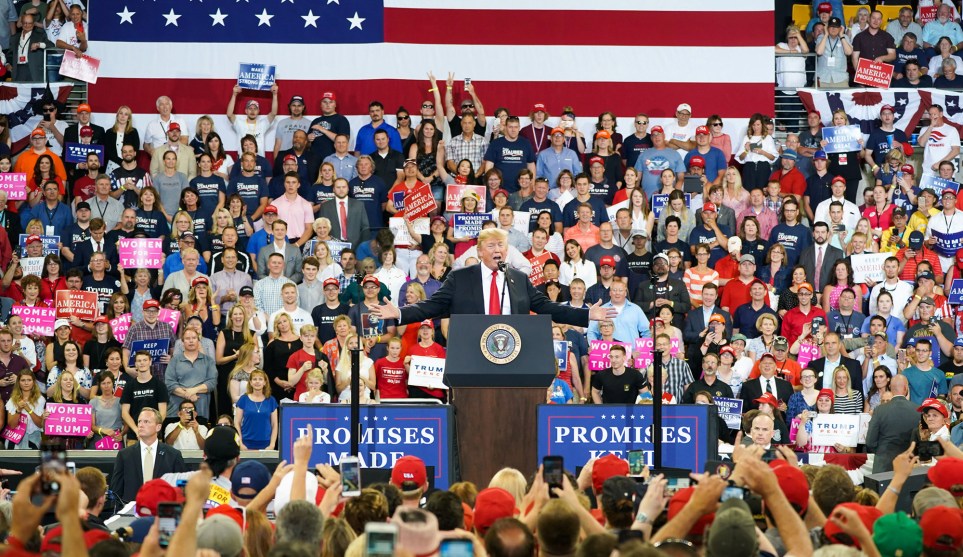 Donald Trump at a rally in Duluth on Wednesday night after testing positive for coronavirus. He held a press briefing before the flight but told no one about his positive diagnosis.TNS via ZUMA

Donald Trump has spent months trying to convince everyone that COVID-19 isn’t that big a deal, and that’s bad enough on its own. But the more we learn about the precise events of the past few days the more mind-boggling they become. The White House, as usual, is being cagey with definitive information, but here’s how it seems to have played out:

Tuesday evening: At the Trump-Biden debate, the Republican side of the aisle, as usual, insists on going maskless. During the debate, Trump mocks Biden for always wearing a mask.

Wednesday morning: Based on later reports from Saturday,¹ it appears that this is when Trump tested positive for coronavirus. He doesn’t bother informing the Biden campaign. Nor does he tell the American public.

Wednesday afternoon: Trump attends an indoor fundraiser in Minneapolis. No one there is informed that he has tested positive for coronavirus.

Wednesday night: Trump attends a rally in Duluth. No one there is informed that he has tested positive for coronavirus. On the flight home, Hope Hicks quarantines herself because she is exhibiting symptoms of COVID-19.

Thursday morning: Trump is informed that Hicks has tested positive for coronavirus.

Thursday afternoon: Trump attends an indoor fundraiser at his Bedminster golf club. No one there is informed that he has tested positive for coronavirus.

A little after midnight Thursday: Trump finally tweets that he has tested positive. It’s unclear if the American public would ever have been told if no one had discovered that Hicks was infected.

Friday: No tweets all day. Trump releases a video that has all the energy of a hostage video. Doctors tell Trump that if he wants to walk to Marine One under his own power for the trip to Walter Reed medical center, he should go now.

Saturday morning: Trump’s physician says Trump was diagnosed “72 hours ago,” meaning Wednesday morning.¹ Another physician says Trump began Regeneron treatments “48 hours ago,” meaning Thursday morning. The White House later claims they misspoke. You may decide for yourself if you believe this, but given both Trump’s past record and the weaselly White House statements about the Thursday test “confirming” Trump’s diagnosis, I sure don’t. In the absence of documentary evidence to the contrary, I think they’re lying.

If Trump really was diagnosed on Wednesday morning, his conduct since then has been reckless beyond belief. And even if the diagnosis happened Thursday night, it was reckless of him to continue attending fundraisers after learning that Hope Hicks was positive. Trump and Hicks spend a lot of unmasked time together, and her positive diagnosis, along with COVID-19 symptoms, was plainly a serious danger signal.

Trump’s eight months of COVID denial has cost more lives than his personal behavior over the past few days, but there’s something here that goes beyond denial and partisan politics. He simply doesn’t care if he gets other people sick. He doesn’t care if other people die. It’s sociopathic beyond anything we’ve seen before.

But it’s not just Trump. Was no one in the White House willing to stand up to Trump and insist that he cancel events and issue a press release? No one? Not one single person? What in the everlasting fuck is wrong with these people?