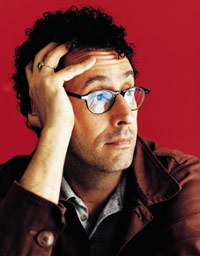 Tony Kushner is the Pulitzer Prize-winning playwright of Angels in America: A Gay Fantasia on National Themes, which airs as a two-part film — directed by Mike Nichols and starring Al Pacino, Meryl Streep, and Emma Thompson — on HBO this December. The play, originally written in 1990, is a sweeping indictment of the Reagan era that follows the story of Prior, an AIDS sufferer caught between an ex-boyfriend and a married lover with a mentally disabled wife. The invented characters are counterweighted by a subplot that centers on Roy Cohn, the McCarthy-era lawyer and right-wing bulldog who died of AIDS in 1986.

Kushner’s other plays include Homebody/Kabul, an eerily prescient play written pre-9/11 that links the modern worlds of London and New York to the fanatical politics of the Taliban, and the forthcoming Caroline or Change, a work set in Civil Rights-era Louisiana. He is also the author of the recently published call to arms, Save Your Democratic Citizen Soul! Rants, Screeds and Other Public Utterances for Midnight in the Republic, a book targeted at young activists.

Mother Jones: It’s been a long road for Angels in America to finally make it to the TV screen. Wasn’t Robert Altman going to direct a film version at one point?

Tony Kushner: Yes — I think Altman is a major American artist, and he was one of the first people I wanted to work with. I sent him the play and he was immediately interested. For about a year and a half I worked with him, wrote a screenplay. At that time it was supposed to be a theatrical release, but studio executives had concerns — about the material, about the budget, about the length — and it fell apart. At one point, even after Altman had left the project, I tried to collapse Angels into one three-hour movie and found that it was impossible. It just literally has too much plot.

MJ: So you’re pleased it’s ending up on the small screen?

TK: I’ve felt for a long time that TV was the right home. I’m kind of a TV junkie, and I felt much less intimidated writing for the smaller-size picture. There’s something about TV that’s much more like theater. The picture quality is not so great, and so you don’t get these epic visual spectaculars like Lord of the Rings. Also, just in terms of the kind of arguments you can make, it’s primarily a dialectical medium, alternating between two cameras. It’s limited — but in an interesting way.

MJ: The HBO production is being grouped with other shows like Queer Eye for the Straight Guy in this new category of gay TV. How do you feel about that?

TK: As a gay man, I’m enormously interested in the phenomenon. Gay TV has been immensely important in transforming American culture in a more gay-positive direction. Roseanne and Madonna, in their respective domains, are so important in their liberation of sexual minoritarians. A show like Will & Grace, especially in the first few seasons, was pretty transgressive in its treatment of the body — pretty kinky and interesting. And Queer Eye is fascinating. It has a pinch-me-I’m-dreaming quality. It’s very bourgeois, of course, and much more about the liberation of the consumer than the liberation of the democratic citizen. Interestingly, I think that Angels will feel tame in some ways. I don’t write sexy. It’s not remotely as hot as some of the things you’ll see on normal cable.

MJ: Since 9/11, another of your plays, Homebody/Kabul, has gotten even more attention than Angels in America. Is it true that you have been rewriting that play since it was first staged?

TK: I have been working on it, yes, but not for political reasons. It’s the first real family drama I wrote: As much as it’s about Afghanistan, there’s a tortured family at one of the two hearts of the work, and that’s what I am endlessly tinkering with. As for its relationship to September 11, I haven’t changed anything about the political context. It’s set in 1998, so nothing needed to be changed.

TK: I think the country is undereducating its young. I think it’s a deliberate, designed, malevolent project by the right to destroy public education. People are more easily manipulated when they don’t have information. If you ensure that kids grow up without basic reading skills, math skills, and so forth, then you ensure that they can’t act effectively.

On the other hand, there will always be a strong sense of injustice among the young. When I wrote Homebody/Kabul, I thought it was time to think more internationally in part because of the IMF and WTO protests, because of all these kids protesting free-market capitalism.

There are a lot of politically active young people, but I feel that we’ve misled them. I have great admiration for the essayists and writers on the left, but the left decided at some point that government couldn’t get it what it wanted. As a result, it’s a movement of endless complaint and of a one-sided reading of American history, which misses the important point: Constitutional democracy has created astonishing and apparently irreversible social progress. All we’re interested in is talking about when government doesn’t work.

MJ: When was the last time that a belief in the system paid off?

TK: It was the day they got that fucking Ten Commandments monument out of Alabama. I found that thrilling. With all the blows that the Bush administration has delivered to the separation of church and state — we have a president who can’t stop talking about his relationship to Jesus while he gleefully murders thousands of people — it turns out that we still kind of get it.

MJ: Your new play, Caroline or Change, looks back on the Civil Rights era through the prism of 1960s Louisiana —

TK: Caroline illustrates one of the ultimate cases in which American democracy achieved something great. I don’t see how anyone can read that history and then turn their back on the system — how anyone can think it’s not important who our justices are, who the president is, who’s in Congress.

These things, these ideas, these decisions, these elections really do transform people’s lives. We’re seeing it now, every day: For gay people, the overturning of the sodomy laws is immensely significant. It’s why I think politics is so extraordinary.

MJ: What about the Democratic Party? Can it effectively oppose Bush?

TK: I have said this before, and I’ll say it again: Anyone that the Democrats run against Bush, even the appalling Joe Lieberman, should be a candidate around whom every progressive person in the United States who cares about the country’s future and the future of the world rallies. Money should be thrown at that candidate. And if Ralph Nader runs — if the Green Party makes the terrible mistake of running a presidential candidate — don’t give him your vote. Listen, here’s the thing about politics: It’s not an expression of your moral purity and your ethics and your probity and your fond dreams of some utopian future. Progressive people constantly fail to get this.

The GOP has developed a genius for falling into lockstep. They didn’t have it with Nixon, but they have it now. They line up behind their candidate, grit their teeth, and help him win, no matter who he is.

MJ: You’re saying progressives are undone by their own idealism?

TK: The system isn’t about ideals. The country doesn’t elect great leaders. It elects fucked-up people who for reasons of ego want to run the world. Then the citizenry makes them become great. FDR was a plutocrat. In a certain sense he wasn’t so different from George W. Bush, and he could have easily been Herbert Hoover, Part II. But he was a smart man, and the working class of America told him that he had to be the person who saved this country. It happened with Lyndon Johnson, too, and it could have happened with Bill Clinton, but we were so relieved after 12 years of Reagan and Bush that we sat back and carped.

In a certain sense, Bush was right when he called the anti-war demonstrations a “focus group.” We went out on the street and told him that we didn’t like the war. But that was all we did: We expressed an opinion. There was no one in Congress to listen to us because we were clear about why they couldn’t listen. Hillary Clinton was too compromised, or Chuck Schumer — and God knows they are. But if people don’t pressure them to do better, we’re lost.

MJ: Is there a tension between the more analytic, complaint-oriented side of your personality, of your work — it’s everywhere in your plays — and this more pragmatic view of politics?

TK: I think what one has to do is to ask oneself, “Do you want to have agency in your own time?” If you really believe that it’s your place to leave the world a better place than it was when you arrived, then how do you get the power? In this country, the most powerful country on earth, you get it by voting the right people into power. There are means of getting the power out of the hands of the very rich and the very wicked. It still flabbergasts me that people didn’t see this during the last presidential election. We had had 12 years of Reagan and Bush to prepare us for this outcome. It couldn’t have been clearer who we were dealing with. George W. Bush was — is — a little robot programmed by his daddy to punish Saddam Hussein and get as much money for the petrochemical bandits. It’s absolutely jaw-dropping that Democrats saw that and decided instead that they wanted to send a message to their own party that they weren’t happy with it for some relatively minor offense. Why didn’t we turn out in vast numbers for Gore? Why did we vote for Ralph Nader or not at all? We would absolutely not be in Iraq today if we had a Democratic president in the White House, and I don’t need to know any more than that.