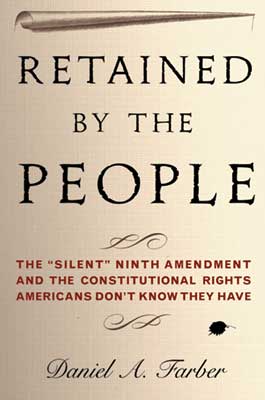 What if the Constitution explicitly granted liberals’ wish list of rights—basic education, reproductive freedom, sexual privacy, and a dignified death? We already live in that promised land, argues law professor Daniel Farber. We just don’t know it, because we’ve made the mistake of ignoring the “silent” Ninth Amendment.

“The enumeration in the Constitution, of certain rights, shall not be construed to deny or disparage others retained by the people,” the Ninth states. What this really means is not exactly clear: The Supreme Court has never based a major decision solely on it. But Farber thinks the framers drafted the Ninth to protect “fundamental rights” such as life, liberty, and the pursuit of happiness, and intended for judges to further define these rights over time. Unlike Supreme Court Justice Antonin Scalia, who looks to the framers’ intentions and declares the Constitution “dead” and unchanging, Farber looks to them for proof that the Constitution is not only alive but evolving.

Farber’s reading of constitutional history is solid, but when he tries to apply the Ninth to contemporary controversies, it’s a stretch. His ideas about which new rights the Ninth should protect rely too much on his view that social consensus should guide judges. For example, most Americans support the right to refuse medical treatment but not the right to assisted suicide, so he says that’s the position the Ninth would instruct judges to take. In the end, the Ninth seems unlikely to live up to the promise Farber sees in it.