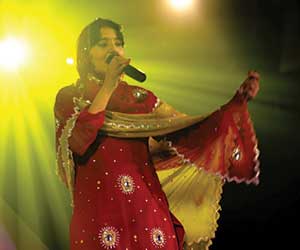 In 2001, after Taliban-era bans on secular entertainment were lifted, an Afghan TV network launched an American Idol-style singing contest. Through an engrossing montage of auditions and intimate portraits, this film captures the Afghan Star craze that swept the nation and brought music to the pop culture-starved masses.

Jeers from would-be Simon Cowells are the least of the contestants’ worries: After letting her head scarf slip, one performer receives death threats. Another claims that the Taliban is texting in votes for her—but later has to seek government protection. Since this film was made, the show’s producers have launched a more conservative follow-up, Koran Star, where contestants recite religious verse.

In the end, this film is less about the contestants than their fans—the shepherd who says his sheep get stomachaches when his favorite contestant is on; the rich man who wants 10,000 SIM cards to text in votes—and how a TV show that just ended its fourth season has united a country.