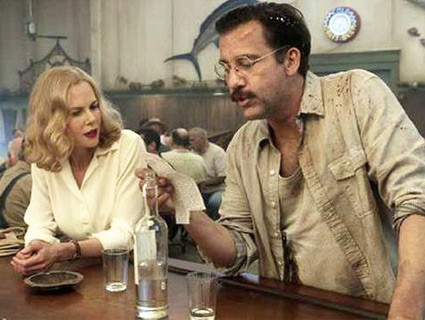 When you consider the brief marriage of Martha Gellhorn and Ernest Hemingway, it’s exceedingly difficult to decide which of the two had the more impressive résumé in the field of maximal badassery. Hemingway protected James Joyce in Parisian bar fights and casually gifted Pablo Picasso a box full of hand grenades. Gellhorn went to Panama to report on Operation Just Cause when she was 81 freaking years old.

So it only seems natural—wise, even—for someone to make a movie out of their relationship. The elements of war, revolution, heartbreak, and alcoholism are all teed up.

Hemingway & Gellhorn, which premieres Monday, May 28 at 9:00 p.m. EST on HBO, digs into the classic theme of finding love and meaning in the thick of war. Hemingway (played by Clive Owen) arrives in war-ravaged Spain in 1936 as a celebrated author and party animal. Gellhorn (Nicole Kidman) arrives as a rising star in journalism, bringing little more than “a knapsack and 50 dollars” to her first foray into war reporting. The two are both guests at Madrid’s Palace Hotel, ground zero for a who’s who of famous Loyalist sympathizers, from Robert Capa (Chilean actor Santiago Cabrera) to John Dos Passos (a sharp-as-always David Strathairn).

“Hemingway thinks writing is a bloodsport,” Dos Passos says to Gellhorn. And at the hotel, we see Hemingway’s hot-headed competitiveness manifest itself in ways both piddling and potentially lethal.

It’s his adrenaline and controlled insanity—as well as Gellhorn’s reaction to it—that provide the film with its most arresting moments. In one particularly tense episode, Hemingway picks a fight with an armed Soviet general (Robert Duvall, in an uncredited but notable bit part) who’s been drunkenly hitting on Gellhorn. “Fuck Russia!” Hemingway spits at the Stalinist goon. The two men then start a game of Russian roulette—a situation which is diffused only after an intervening party offers them “vodka made for Peter the Great.”

“The fascists are trampling Spain, and you two are comparing testicles,” Gellhorn then says, to lend a moment of clarity to the exhibition of unchecked testosterone.

It’s a juicy, riveting scene. Shame there weren’t more like it in the film.

Hemingway & Gellhorn certainly has its winning aspects. Director Philip Kaufman (who helmed Quills, truly one of the most underrated scorchers of the last decade) strikes the right grainy visual notes in recreating the bombs, booze, and inferno of various 20th-century war zones (Spanish Civil War, the Winter War, the Second Sino-Japanese War, WWII). The script, by Barbara Turner and Jerry Stahl, is competently researched and generously peppered with quotes recognizable to any Gellhorn and/or Hemingway buff: “Fuck all your objectivity shit,” Gellhorn shouts to a couple of fellow journalists in Spain—reflecting Gellhorn’s real-life tendency to conflate the meanings of the words “objective” and “unbiased.”

The acting is uniformly on-the-mark, including a compelling performance by Tony Shalhoub as Mikhail Koltsov, a Bolshevik journalist and NKVD lackey who kidnaps Spanish Loyalists in his spare time. Kidman and Owen, as expected, get the job done with passion and chemistry to spare.

But after Gellhorn and Hemingway leave Spain, the movie takes a nosedive, losing its narrative focus and pacing.

Once the two get hitched, the filmmakers seem more interested in showing montages of Gellhorn roughing it through conflict zones than portraying the deterioration of the couple’s relationship. Kaufman and co. try to compress five years of glamor, grit, mutual cheating, and clashing egos into the latter half of the film, and can’t seem to come up with a single defining or outstanding scene. Hemingway’s outright cruelty towards his wife is shown in a string of jarringly petty acts, almost all of which go unexamined. And when Gellhorn finally calls it quits and demands a divorce, the result feels at once rushed, anticlimactic, and hollow.

In the end, their once storybook, now shattered romance is reduced to something of a footnote in its own movie. Hemingway & Gellhorn just doesn’t have the subtlety or the cutting drama worthy of its two central personalities. The doomed romance is handled with all the depth of somebody shouting, “Boy meets girl; girl likes to cover wars; girl leaves to cover wars a whole lot; boy doesn’t like that one bit; boy and girl get sick of one another; deal with it!”

Same goes for this movie.