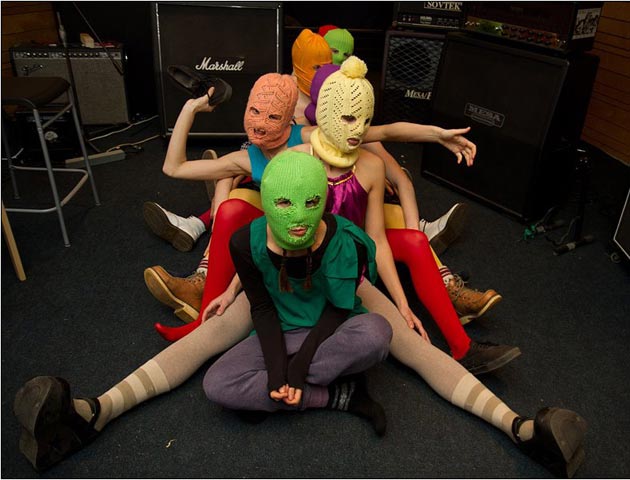 The February 21 gig at Christ the Savior Cathedral didn’t exactly go according to plan. In rehearsals, the women of Pussy Riot had crafted their neon outfits, assigned each other verses, and coordinated their kicks for the chorus. But at the event, they’d barely begun to sing before church security was on them, confiscating their amplifier and strong-arming the women away from the alter. The band’s guitarist wasn’t even able to plug in before a guard ushered her toward the door. As they were escorted out, the band members’ cries of “It’s God shit!” echoed awkwardly and mostly incoherently through the vast cathedral. The show was sloppy, amateurish and over in about a minute: the perfect punk rock moment.

Their now famous 2012 performance would land the women in a world of trouble. The church and the government denounced their act as an attack on the Russian Orthodox religion; the authorities arrested three band members, holding them without bail for months in advance of a trial that would gain international attention, exposing to the world the flaws of the Russian courts and the growing resentment many Russian citizens hold toward Vladimir Putin’s regime. Debuting tonight, HBO’s new documentary Pussy Riot: A Punk Prayer, offers a primer on the country’s recent history and an explainer on the trial of Nadia, Masha, and Katia—the three young artists at the center of the storm. Here’s the trailer:

Pussy Riot was formed as a punk-rock art collective in response to Putin’s return to the presidency for a third term. While the Russian constitution sets limits for consecutive terms, Putin was able to retain power by serving an interim term as prime minister (and puppet master) while President Dmitry Medvedev kept his seat warm. Putin is notorious for repression of political competition. Among other things, he has detained opposition leader Alexei Navalny, threatened human rights groups, and marginalized what he called “unreliable elements” in government. But arguably his biggest PR debacle in the past year (besides, maybe, his divorce) were the brash, young feminists who set out to agitate the status quo and challenge the patriarchy with their righteous and rebellious performance art.

Taking cues from the Occupy movement and the culture of flash mobs, the women staged unsanctioned concerts to protest the injustices they saw in the culture’s repression of women, corporate control of the economy, and the church’s cozy relationship with the Kremlin. In one memorable scene early in the film, Putin strides confidently down a long red carpet while his supporters applaud his return to the helm. The footage is transposed with images of Pussy Riot’s eight members in their signature candy-colored tights, dresses, and balaclavas—striking against the gray of a Moscow winter—as they climb the gates of the Red Square and launch into a performance of a song called “Putin Zassal,” which translates roughly as “Putin has pissed himself.”

A group of white-bearded, leather-clad religious men singles out Nadia as “a demon with a mind.”

It was the first real brush with fame for a group that was quickly becoming an icon in the country’s growing creative-protest movement. A few weeks later, emboldened, they entered Christ the Savior Cathedral. Soon all the world would know of their cause.

The film turns from a music documentary to a courtroom drama after the three women are arrested and put on trial. In court, Nadezhda Tolokonnikova (Nadia), Maria Alyokhina (Masha), and Yekaterina Samutsevich (Katia) are confined in a glass cage, where members of the media voraciously snap their photos and demand comments. The women appear bemused by all the attention, but understand that they face up to seven years in a labor camp for what the prosecutors call an act of hooliganism fueled by religious hatred.

The poised and pouty Nadia, the group’s unofficial leader, becomes the prime target of backlash. The Carriers of Cross, a group of men who, with their white beards and black leather attire, resemble a motorcycle gang, single her out as “a demon with a mind.”

“This is a weapon,” says one of the men, clad in a T-shirt reading “Orthodoxy or death,” as he brandishes a long, spear-like cross menacingly before the camera. In the 16th century, the women would have been hanged or burned at the stake, another man says—not without a creepy tinge of nostalgia.

When the women, silenced for most of the trial, are finally allowed to speak, they are calm, articulate, and not altogether unapologetic. They express remorse for offending church members, and say that their act was misunderstood. They call themselves peaceful jesters who hate no one and only want to live in a world where they can speak out without recrimination.

But that world, it becomes apparent, does not yet exist in Russia; the three are found guilty and given two-year prison sentences. The trial and the guilty verdict sparked outcry worldwide. Amnesty International named the women prisoners of conscience, and big names including Madonna, Yoko Ono, Sting, and Paul McCartney have called for their release.

Katia has since won an appeal on the technicality that she never was able to plug in her guitar and so didn’t participate in the act. She has been released, but Masha and Nadia remain in the labor camps where they say the conditions are terrible. (Nadia was hospitalized in February, complaining of exhaustion and headaches as a result of being overworked; Masha began a hunger strike in May, saying prison guards were trying to turn the other inmates against her.)

Pussy Riot’s strongest performance, in the end, took place not with its members hidden behind balaclavas, but after they were placed on public display. The Russian authorities gave the women a public platform beyond their wildest dreams. The trial, and now this documentary, succeed in exposing a defective government and its continued subjugation of political dissent.