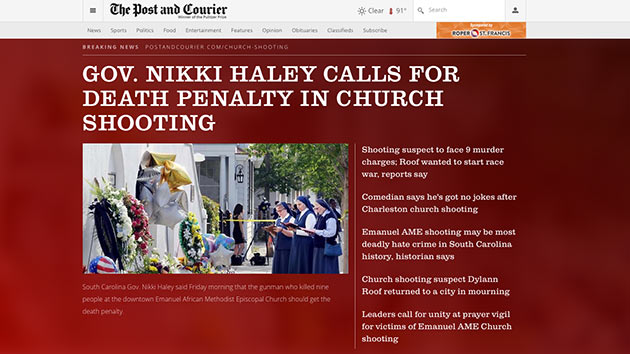 Charleston’s Pulitzer Prize-winning daily newspaper, the Post and Courier, is investigating the possibility of a “denial of service” attack that shut down its news website for long stretches Friday morning, in the wake of Wednesday night’s massacre at the city’s Emanuel AME church.

“We’re exploring whether it was an infrastructure issue, or whether it was a concerted attack, a DDoS attack,” Mitch Pugh, the newspaper’s executive editor, told Mother Jones Friday morning. Pugh is referring to a “distributed denial-of-service” attack, which renders a website useless by overwhelming its servers with automated requests for information. “It’s starting to look like someone tried to take our site down,” he said, though he warned it’s still too early to say for sure, despite “early indications.”

The Post and Courier first posted about the outage at about 7 a.m. Friday morning, via Twitter. But problems persisted. The website was inaccessible for “20 to 30 minutes at a time, sporadically,” across the morning, Pugh said. The companies responsible for hosting the website, he noted, are “telling us that they are seeing activity on their end that would indicate a DDoS attack.”

The site’s outage comes amid the newspaper’s second major international story in as many months, after the death of Walter Scott in North Charleston in April. The outlet has been aggressively covering the Charleston church massacre since Wednesday night, producing up-to-the-minute coverage on its website by throwing between a half and a third of its newsroom (of about 80 people) at the story, Pugh says. Covering such an intense story has been emotionally and physically draining for everyone: “We’re trying to get people more into a shift mode and get some mental health breaks, and some downtime to get some rest,” he said.

“A lot of our folks know people who were either in the church or close to people in the church,” he added. “So it’s certainly an emotional, difficult time for everybody.”

Pugh said the newspaper was working with its hosting companies—NewsCycle Solutions and Savvis—to get to the bottom of why the website went offline. In the meantime, the website appears to be back in business:

http://t.co/ya7llzzFBP appears back up. May have been DDoS attack or may have been incompetence or both. I’m a journalist so I trust no one.