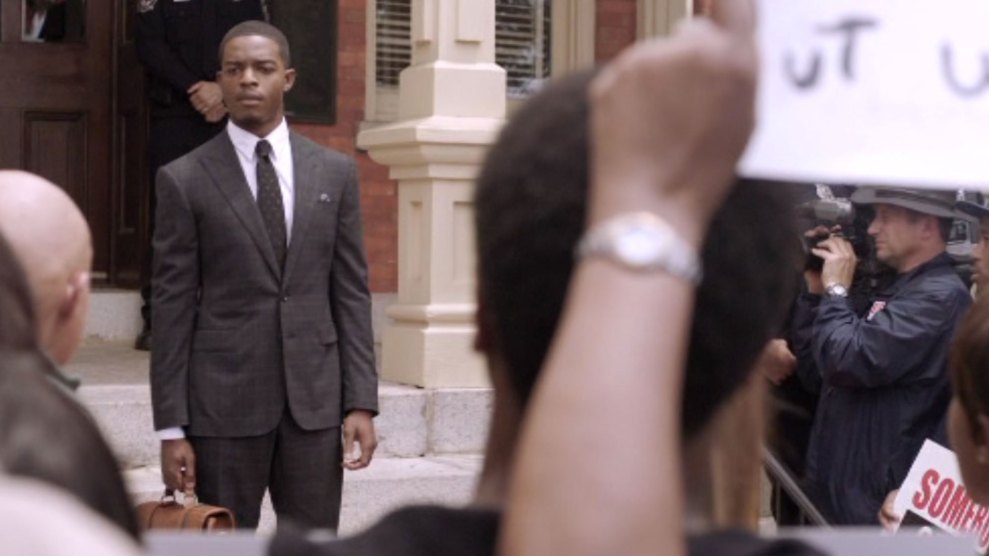 Fox’s limited event series, Shots Fired, ends its 10-episode season tonight. The show, which stars Stephan James, Sanaa Lathan, and my father, Richard Dreyfuss, centers around a small North Carolina community plunged into chaos after a black police officer, Joshua Beck, shoots a white college student, Jesse Carr, who had allegedly reached for a gun during a traffic stop. When Department of Justice investigators arrive, they soon uncover a second mystery: Only weeks earlier, a young black teen named Joey Campbell had been killed. But by whom?

In March, my colleague Brandon Patterson spoke to co-creator Reggie Bythewood about the show’s origins. As this “10-hour film” (as the creators call it) prepares to wrap up, I spoke with Bythewood and co-creator Gina Prince-Bythewood, his wife, for an update on what to expect in the finale and what the series has taught them about the risks and rewards of depicting race and police violence on network television.

Mother Jones: How was directing the finale?

Reggie Bythewood: You’re always in the hot seat as a director, but doing the final hour of the 10-event series was a lot of pressure, but I would say really good pressure. This was the hour that allowed us to see what really happens between Joey Campbell and the people who surrounded him. And it allows us to see what really happened between Jessie Carr and Beck. The fact that we have those revelations is great.

MJ: You’ve said that you first had the idea for the show when Trayvon Martin was killed.

RG: After the Zimmerman verdict came in, I showed our oldest boy this Emmett Till documentary. And out of that he wrote this story about Trayvon Martin going to heaven and meeting Emmett Till. That story ended up being in hour five of Shots Fired.

Emmett Till felt like this ghost that always haunted us. When you came up the elevator to our writers’ room, the first thing you saw was a big picture of Emmett Till. Everybody who walked in had to pay homage to Emmett. The last day shooting the finale ended up being Emmett Till’s birthday. So it made directing this feel like a spiritual process.

There were a lot of tears shooting our final scenes. It wasn’t just our lead actors who were crying. It was also our background actors who were crying and hugging. It really felt like everybody came together, believing in challenging people’s points of view, raising consciousness, and making this world better for all of us.

The other thing that was great to have was great actors with such passion for what we were trying to do. It’s great to see Sanaa Lathan going toe-to-toe with Richard Dreyfuss. There were times when you could see the two of them just get together and elevate the scene.

And even in the finale, there’s a scene where Stephan James, who plays Preston, is going after Arlen [Dreyfuss], who’s on the stand testifying before the grand jury. It’s these two guys, like boxers, using their own tactics to try to win.

MJ: One of the things I found so interesting about Arlen, my dad’s character, is that he was inspired in part by the case in Tulsa where a reserve deputy sheriff shot and killed an unarmed man when he accidentally grabbed his pistol instead of his taser.

RB: In the news, there was so much focus on the shooter and whether or not he meant to pull his taser. But, the biggest story to us, which never really got great media attention, was that this police department was essentially running “tours” and letting wealthy folks come in and pay for the opportunity to be police officers with little training.

MJ: And they were letting them come in because they were donating to the police force and then doing some small amount of training and then were like not really deputized, but were allowed to take a gun—

Gina Bythewood: The fact that they were allowed to have a firearm and they had falsified the training records because these men had not been properly trained. They were not just playing cop in the suburbs and they’re not playing cop on college campuses—they were playing cops in black neighborhoods. What is that mentality? Like why do you want to do that? It really is horrifying that that was allowed to go on, for the thrill for these rich white individuals who wanted to play cops.

“Once you know about it, you can’t unknow it, and it really will make you an activist.”

MJ: I think most people don’t know that sort of thing is happening.

GB: Yeah, I mean it’s just so corrupt, the system. The show is basically a 10-hours-long seminar about how the system is corrupt from the streets all the way up to the highest level of government, and there’s so much collusion based on money and power. Once you know about it, you can’t unknow it, and it really will make you an activist. For us, the show was our effort at being activists.

MJ: I know my dad feels the same way.

GB: The fact that this is on the air still surprises us sometimes: the fact that Fox put it on the air and never told us to pull back on anything we said, and that they’re proud of the show. We feel very, very lucky that we got to do this event series.

MJ: Presumably there were a lot of people who were surprised that this was on Fox, because people conflate Fox with Fox News.

MJ: Fox News at the moment is going through a bunch of stuff, but at the same time, 20th Century Fox is doing separate and fantastic things, and I think there must have been a lot of surprised reactions. Did you guys get a lot of that?

GB: The nervousness was something we had to fight against, and make clear that this was a Fox project, not Fox News.

RB: Even in the beginning, Gina and I had asked, “Wait, are you going to really let us do this?” To be honest, we initially had those questions and we were actually blown away that we’ve been able to do this show on network TV, not cable.

MJ: The show is billed as a special event series, but do you have plans for a second season?

GB: From the beginning, we knew we wanted it to have a beginning, middle, and end and wanted the audience to know they were going to get a conclusion.

RB: We needed to do a first season that felt uncompromising and really reflected the type of storytelling we wanted to do. Once all that was done, if it really felt great—and if the network wants to—I know we can figure it out. If we were to do a second season, it would be tackling another social issue that has not been addressed in TV yet, as well.

Watch the season finale of Shots Fired tonight at 8 PM ET/PT on FOX.