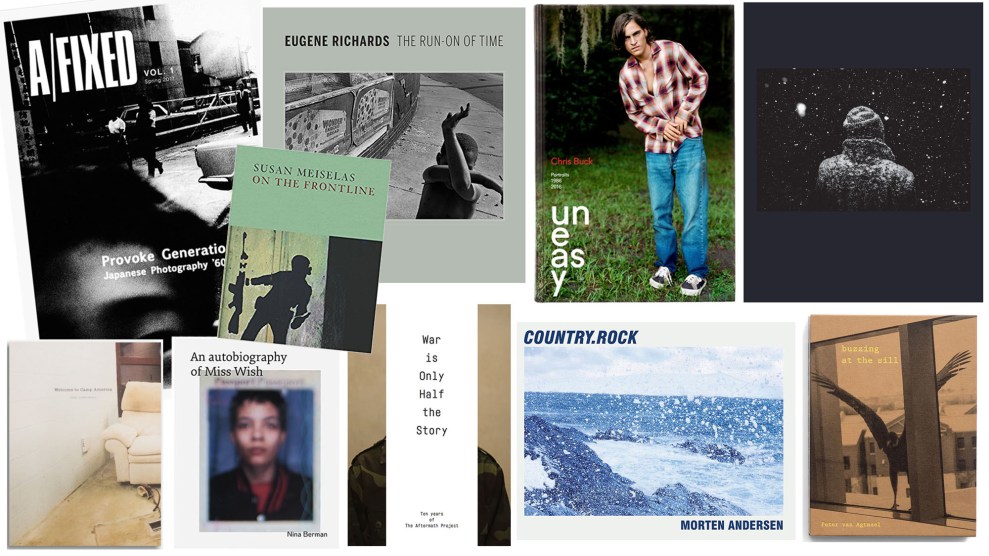 This past year seems like we were treated to more photo books than ever. That is, at least in part, due to crowdfunding efforts that are helping photographers defray the exorbitant cost of publishing. The unyielding flood of photo books is evidence that photographers are still turning to the medium as the preferred venue to get their work out into the world—and, with the rise of crowdfunding, on their own terms.

This is not an exhaustive list of books I’ve enjoyed over the past year—there are too many, especially if you include the number of the exceptional self-published photozines that have come across my desk. But here I’ve collected 10 books, many of which I’ve returned to throughout the year and some of which just came out but are already clear favorites.

Nina Berman is one of the smartest documentary photographers of our time. Her latest book stands as a testament to her unique talent for pushing photography to new levels. Miss Wish begins as the lives of Berman and Kimberly Stevens intersect in 1990, when Berman was in London to photograph the effects of Thatcher-era policies. Stevens, or Miss Wish, was one of many street kids hanging out in London’s East End. Initially, Berman spent a few weeks photographing her. They later became close, much more than traditional photographer and subject. Told through the perspectives of both women, this book effectively uses a range of narrative elements—ephemera, photographs, drawings, notes, text messages, hospital reports—to trace Stevens’ history through sex trafficking, child pornography, PTSD, and her struggle to break free and establish herself as an artist in New York City. It’s a dark book, but it’s unique in its storytelling method and its devotion to the subject. Though Berman’s photographs are just one element used to tell this story, they are striking, and among her best work.

Norwegian photographer Morten Andersen’s 21st book defies easy categorization. True to his style, the work in Country.Rock isn’t quite street photography, nor nature photography, nor music photography, but all of these at once. Opening one of his books is like tumbling through a jumble of great images. There is no order to follow here, no clear narrative. Move through the book as you wish and you’ll get something out of it. But be sure to digest the entire book as a whole; that’s how his work is understood best, not by parsing out individual images. In Country.Rock, Andersen recalls his earlier, nature-focused books Leira and Blå Skog/Blue Forest, but this time he travels to Northern Norway and photographs life in the cold, rugged seaside. The result is a mix of landscapes with images from music festivals and life in small villages, all shot with the loose sensibility of a street photographer.

The work in this book borrows freely from a particular style of early-’70s Japanese photography that favored dark, grainy, high-contrast images. As the title suggests, Van Malleghem traveled through Scandinavia making moody photos that ask questions as much as they tell a story or describe a place. It’s a book that gives a wonderful sense of wandering and exploration with a certain melancholic bent.

First granted access to photograph the detention center at Guantánamo Bay in 2014, Cornwall’s book is an extraordinary look into the psyche behind the prison itself. In addition to photography of the more surreal elements of the base, such as gift shop items, Cornwall digs deeper and includes related government documents and other source materials, as well as portraits and short bios of men who have been released from Gitmo. You can read my full write-up here.

The Run-On of Time, Eugene Richards

This essential tome is, as its core, a much appreciated career retrospective of the groundbreaking work of Eugene Richards, one of the most influential photojournalists/documentary photographers of the late 20th century and beyond. With an unflinching, up-close style, he documented many of the struggles facing lower- and middle-class America since the early ’70s. From Arkansas cotton fields to crack houses in Brooklyn, emergency room drama and his own wife’s death from breast cancer, Richards put you right there, like few other photographers can. You can see images and read a full write-up here.

On the Frontline, Susan Meiselas

Similar to Richards’ book, Meiselas’ own retrospective, On the Frontline, feels overdue, even if she’s not quite ready for a capstone on her career. This book traces the arc of Meiselas’ work, from college student to legendary photojournalist—covering wars in Central America, shooting at high-end sex clubs in New York, and then pushing beyond traditional documentary photography by telling the story of Greater Kurdistan using historical and family photos alongside her own images. Though it’s important to note that this otherwise perfect book doesn’t capture how, beyond being an exceptional photographer, Meiselas is a powerhouse behind the scenes in the photo community, as founder of the Magnum Foundation and notable mentor, among many other supportive roles. The book is fairly compact—not a grandiose coffee table book—which creates a work that is accessible and particularly focused on the images.

In February, we published a full write-up on Buzzing at the Sill, casting it as a look at “real America,” but not in the tired cliché you’ve been hearing since the presidential election. For more than 10 years, Peter van Agtmael has documented the reverberations of the 9/11 attacks, from Afghanistan to rural Maryland. And he sees this book, his third, as the latest chapter in a larger body of work tracing the far-reaching impact of those attacks on America. Buzzing at the Sill focuses primarily on disparate areas of the United States—Michigan, South Dakota, Oregon, Texas, and Florida among them—giving a brilliant, nuanced look at the long-term ripple effects of the war on terror.

I’ll come out and say it: I’m not a person who picks up many photo books focused on portraiture. There are exceptions, of course, and this is one of them. Buck uses his sharp wit to coax musicians, actors, and businesspeople into often unexpected poses that, as the title suggests, create an air of uneasiness. Sure, it’s fun to look for subjects here that you admire or despise, but the book is a sterling example of how portraiture, when done well, has the power to tease out the subject’s personality, as well as the photographer’s. Bonus: At the end of the book, Buck includes anecdotes about many of the shoots.

War is Only Half the Story: Ten Years of the Aftermath Project, Sara Terry

Terry’s Aftermath Project awards grants to photographers who cover the consequences of war. It has published eight catalogs of work that portray life after a war winds down, when journalists and soldiers leave—the period that sees people rebuilding their lives and cities, coping with trauma. Terry herself focuses on Bosnia, where she went “to cover the aftermath of war—to try to capture the images that are the all too often forgotten companions of the vivid pictures of war itself,” she writes in the book’s introduction. “I came with the conviction that war is only half the story. I believed, and still believe, that what happens in the aftermath of war is as newsworthy, if not more so, than the destruction and horror of war.”

This collection, published to demarcate the Aftermath Project’s 10th anniversary, pulls work not just from Terry but also from past grant winners, and the result is a showcase of the most powerful documentary photography of our time. It features work from emerging and legendary photographers such as Ami Vitale, Stanley Greene, Danny Wilcox Frazier, Jim Goldberg, Justyna Mielnikiewicz, Carlos Javier Ortiz, and Nina Berman. As the Aftermath Project has grown, it’s moved from looking at the aftermath of immediate battle, like in Bosnia, to take a broader view of what one considers a conflict, beyond the classic definition of war, like the genocide of Native Americans and gun violence plaguing cities like Chicago. (Note: I jumped the gun a bit on this one. The official publication date is 2018.)

This one is not technically a book, but a tabloid-sized newspaper focused on exploring the Provoke-era of Japanese photography—a brief period in the late ’60s and early ’70s that gave rise to a groundbreaking style anchored by a small group of photographers whose work tended to be blurry, skewed, and heavily contrasted. From a uniquely personal perspective, they documented protests and other critical issues facing post-war Japan. The work was of its time and still very much ahead of its time. Photographers today are still discovering and being influenced by the work of Daido Moriyama, Takuma Nakahira, and Yutaka Takanashi. A/Fixed editor Tsuyoshi Ito interviews some of the original Provoke photographers and photo historians about the work and its continued impact on photography, and he showcases essays and plenty of large, awe-inspiring photos. It is an excellent companion to the Provoke book published last year by Steidl.