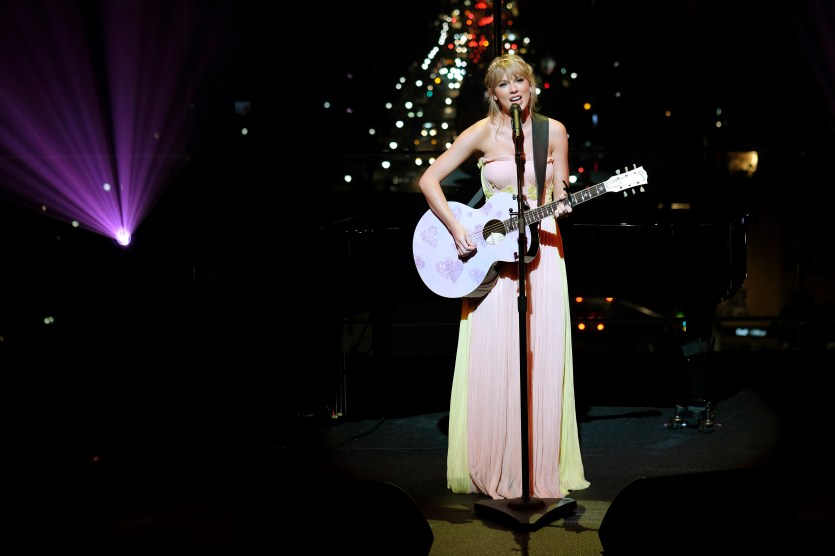 On October 24, 2006, Taylor Swift, all of 16 years old, released her debut album, Taylor Swift. The album peaked on the Billboard 200 at No. 5—a worthy spot for a debut album—and was eventually certified as seven-times platinum by RIAA. Since then, every single Swift album has peaked at No. 1 on the Billboard 200. For 13 years Taylor Swift has been a constant in our lives, and over the past decade, millions of people have devotedly listened to every track, religiously bought her every album, and dissected every aspect of her life.

But as Swift drops her seventh LP, Lover, you can’t help but notice something’s different: It’s a goodbye.

This is not Swift’s final album. It’s not a goodbye to her fans or to the music industry. Rather, it’s a goodbye to an era. By effectively returning to the sounds and storytelling that made her the chart-topping teenager millions fell in love with 13 years ago, Lover is a reintroduction to a Swift we’ve ultimately forgotten.

Swift’s career is best looked at in parts. There’s the country-heavy, young-lust–filled first act of her early three albums, Taylor Swift, Fearless, and Speak Now. Then there’s the mainstream second half of her body of work that saw a new legion of fans join the Swiftdom: Red, 1989, and Reputation. (Red serves as the dividing point of her arc, representing the awkward—but still banging—era in which she was transitioning from “country” to “pop.”) Looking at Swift’s career in these two parts, a larger picture begins to form: Act 1, a tale of young love and an exciting world told with bright eyes and an innocent heart. Then comes Act 2, a tale of a young adult finding her identity in a nastier world, struggling to understand what mature love looks like among feuds and heartbreaks.

Like Red before it, Lover is Swift’s awkward goodbye to an era of her work that exemplifies a period of learning, loss, and love.

Lover, as a whole, showcases Swift’s unmatchable talent of using specificity to evoke the familiar emotions that come with searching for love, finding love, and moving on once that love has been lost. There’s “Cornelia Street,” which speaks of the inability to return to spaces that stir up, as Swift puts it, “the kinda heartbreak time could never mend.” “Death by a Thousand Cuts” takes the simple, yet excruciating familiar pain of a cut and righteously equates it to the pain of fresh heartbreak. And “Soon You’ll Get Better” is the Dixie Chicks-assisted letter to her mom, Andrea, who’s currently in a battle with cancer. The Dixie Chicks’ background vocals reinforce the emotion of Swift struggling with the idea she’s centering herself—a common criticism that even we’ve reinforced at times—as she fears losing her mom. “And I hate to make this all about me/But who am I supposed to talk to?/What am I supposed to do?/If there’s no you,” she sings.

Swift doesn’t lose her power among the 18 tracks. “Paper Rings” is yet another Swift/Antonoff production that conjures the similar sporadic energy that made Kesha’s Rainbow come to life. (Special shoutout to “It’s Nice to Have a Friend” and “False God” that elicit a similar odd energy.) “The Man” borders on tiresome, but what is a Taylor Swift album without at least one song about the way the world views her? It’d be boring, that’s what.

1989 and Reputation, while both excellent, came with expectations. 1989 could only be consumed as Taylor Swift’s “first official pop album.” Reputation was designed to be listened to with an entire multi-year feud in mind. Lover can be seen only through the prism of Swift’s entire 13-year arc. It’s a summing up and an augur of what’s to come.