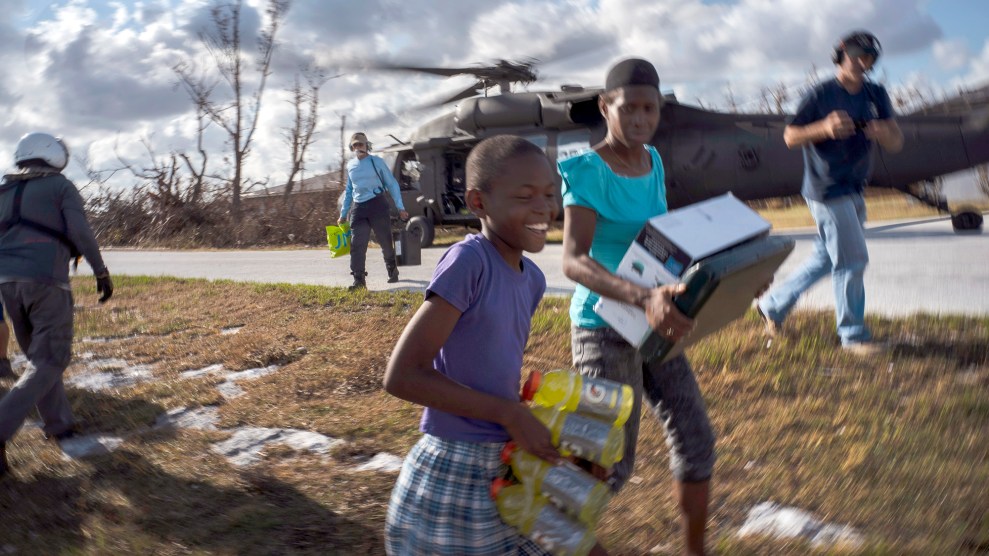 To Virginia’s historically black Hampton University, it was the right thing to do. To R.E.M., it was a gesture to help a nation it loved. To chef José Andrés, a US citizen since 2013, it was what he does.

Each has done what they can to help the survivors of Hurricane Dorian while the administration in Washington has tightened visa enforcement on those fleeing the devastation—and has openly insulted them.

Hampton offered free tuition and room and board to students of the University of the Bahamas-North who were uprooted by the natural disaster. R.E.M. dug up a 2004 song it had recorded in Nassau and released it on Thursday, saying all sales would go toward Bahamian relief. Andrés said Friday that his World Central Kitchen, which played a crucial role in feeding Puerto Ricans after Hurricane Maria, had served more than 200,000 free meals since arriving in the Bahamas in early September.

12 days since we @WCKitchen arrived in Bahamas, and 200,000 fresh meals served as of today! Sorry I’m a little tired but here’s a quick morning update as another tropical storm is nearing… #ChefsForBahamas pic.twitter.com/RKOmDN6xHB

R.E.M.’s Mike Mills said that donating proceeds from the song “Fascinating” was a no-brainer. “I spend a lot of time every year in the Abaco Islands, which was literally ground zero for this disaster. I know a lot of people who lost everything,” Mills told Bandcamp Daily.

“I have been fortunate to spend many weeks working and playing in the Bahamas, making friends and lots of music there,” he added. “It breaks my heart to see the damage wrought by Hurricane Dorian.”

Others have stepped up in myriad ways in the northern Bahamas. A Florida billionaire donated his yacht to deliver 30 tons of supplies—and rescue 50 dogs—according to the Naples Daily News. Another part of the US government, the Agency for International Development, has committed millions in disaster assistance. If you wish to help, nonprofit evaluator Charity Navigator has compiled a list of reputable charities working in the Bahamas.

How prejudice dies. A public outcry prompted a Northern California winery to reverse its no-same-sex wedding policy and offer to host the marriage of Dezanea Reyes and Alex Biddle. The Viaggio Estate and Winery initially sent an email rejecting to host the couple’s nuptials, saying same-sex weddings violated the owners’ personal religious beliefs. Reyes posted that email to social media, where it became drew national attention. Winery co-owner Teri Lawrence then apologized, changed policy, and belatedly offered the venue. Lawrence acknowledged that her rejection “was hurtful to the people involved.” For Reyes, the about-face came too late; she and her fiancée booked another place. Nonetheless, Reyes was pleased. “I want the next person to know that they won’t get the same [rejection] email,” she said. (Los Angeles Times)

Saving the “Yosemite of the North.” Thousands of people came together to buy nearly 2,000 acres of a stunning glacier-carved gorge in British Columbia, saving it from developers. Students, sailors, and businesspeople joined forces in a three-month grassroots effort to raise $2.3 million for the land in Princess Louisa Inlet, part of a pristine stretch of the fjord-dotted Canadian Pacific Northwest. “These forests are our cathedrals,” said Andrew Day, chief executive of the British Columbia Parks Foundation, which will administer the land. A fifth grade classroom, which raised hundreds of dollars by selling food and crafts, put it this way in a letter to the foundation: “One day, we might all have the chance to visit this beautiful piece of wilderness, knowing that we played a role in saving it for future generations.” Thanks to Shirley Brady for the tip. (New York Times)

Getting it right this time. When Chance the Rapper’s 4-year-old daughter, Kensli, was born, the Chicago musician embarked on a tour two weeks later, missing milestones in her life. He was absent, as he put it, “when her mother needed me the most.” After the birth of daughter Marli, Chance told fans last week he was delaying his upcoming tour, adding, “I need to be as helpful and available as possible to my wife [Kirsten Corley Bennett] in these early months of raising Kensli and Marli.” Fans celebrated Chance’s decision, and the parenting blog Motherly said Chance highlighted the fact that paternity leave needs to be paid and unstigmatized. “Today,” Motherly wrote, “we took a huge step toward that last part thanks to Kensli and Marli’s dad.” (Washington Post)

On a final note, how better to distance yourself from the dizzying news cycle than by enjoying this view from Hawaii’s Kilauea Point National Wildlife Refuge, via the Interior Department’s Twitter feed? Thanks so much for being part of this week’s Recharge, and for all your comments, suggestions, and support. Have a great week ahead!