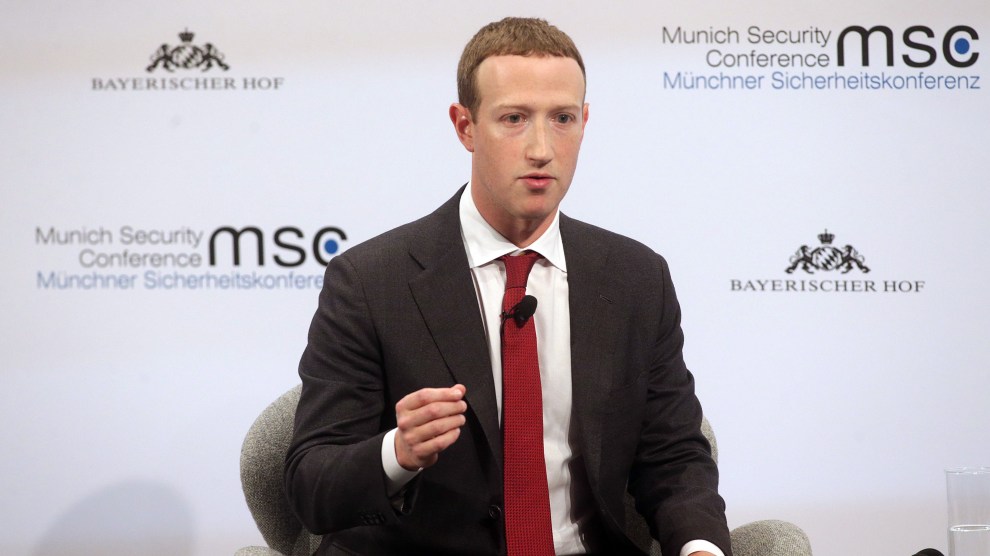 Facebook CEO Mark Zuckerberg said that it’s getting harder to spot and stop election meddling as the technology becomes more and more sophisticated, and he welcomed regulation….to a point.

“We don’t want private companies making so many decision-balancing social equities without democratic processes,” he said at the Munich Security Conference on Saturday. “I do think that there should be regulation in the west on harmful content … there’s a question about which framework you use for this.”

Zuckerberg and other top Facebook officials have called for regulation in lieu of taking difficult positions on policing its own platform. Company executives have repeatedly said that they don’t feel comfortable taking positions on addressing deepfake videos and disinformation spread by politicians, for example, and want the government to step in and provide regulation instead. According to Zuckerberg, he sees Facebook’s potential framework for dealing with disinformation as somewhere between policies held in newsrooms and by phone companies.

The sentiment aligns with one expressed by Rob Leathern, Facebook’s director of product, earlier this year. “Ultimately, we don’t think decisions about political ads should be made by private companies, which is why we are arguing for regulation that would apply across the industry,” Leathern wrote in January. “Frankly, we believe the sooner Facebook and other companies are subject to democratically accountable rules on this the better.”

Still, the company also sent its lobbyist to California to fight against proposed regulations that would have given citizens European-style transparency rights over how their data is collected, signaling that Facebook will only accept government input up to a point.

“One of the things that we are tracking that we have been quite worried about is that increasingly, [domestic] election interference. We have also seen these actors get more sophisticated at trying to hide their tracks,” Zuckerberg said.

Other Facebook employees, including its chief security officer Nathienal Gleicher, have routinely bemoaned the whack-a-mole nature of policing “threat actors” on social media.

Zuckerberg highlighted successes within the company, as well; last week, he says, Facebook shut down Russian and Iranian accounts that sought to influence American politics. He bragged that the company has “played a role in helping to defend the integrity of” more than 200 elections around the world, and touted the AI tools the company is developing to address the magnitude of the problem.

“I started the company in my dorm room. Back then, we could not have 35,000 people doing content and security review,” Zuckerberg said. “The AI 16 years ago, did not exist … to identify this type of harmful stuff.”

While Facebook has improved its processes to crack down on foreign political influence campaigns the company has yet to figure out how to address domestic misinformation to a satisfactory degree. The new protocols only came after irreparable damage was done in the 2016 election, when Russian trolls and others flooded Facebook with political disinformation. Facebook ramped up its enforcement, shutting down accounts that tried to manipulate its platform for profit by posting sensational and often misleading content, but gaping holes remain in its policies for handling politicians and political actors spreading disinformation and lies.

On the day of the Iowa Caucuses, the company did little to stymie the flow of disinformation regarding right-wing hoaxes about election rigging. And last spring, it didn’t do much to curb the spread of a video of Speak Nancy Pelosi that was doctored to make her appear drunk, simply saying the video didn’t violate its rules and therefore would not be removed.

Though Zuckerberg says he welcomes regulation, it’s unlikely anything substantive will come before the upcoming presidential election, leaving the American democratic process vulnerable once again.