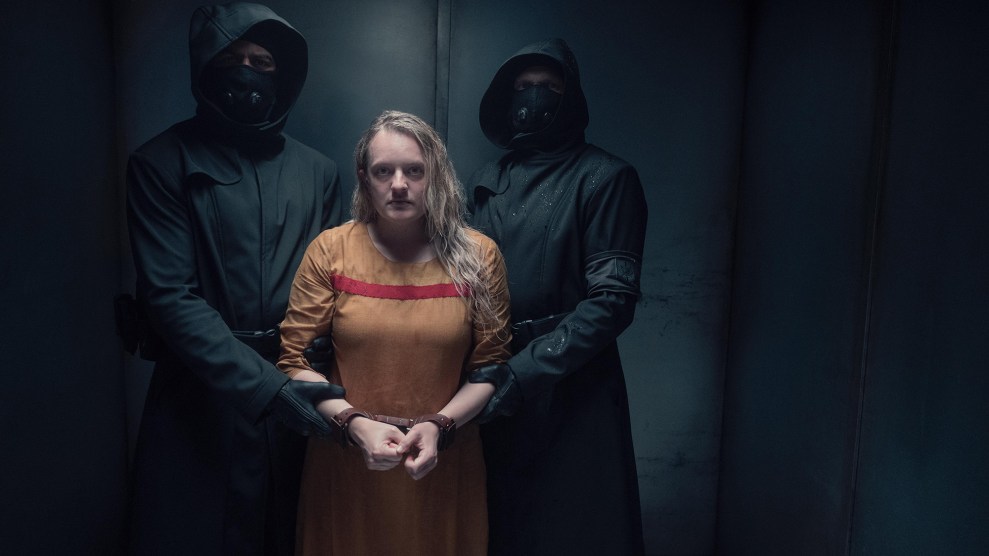 If you’re reading this and you’ve watched even a fraction of an episode of The Handmaid’s Tale, you know that this cannot possibly be counted as a spoiler. June is always screwed, in a variety of ways, to the point that it would feel almost comical if it weren’t so damn dark. She takes one step forward, she is dragged two thousand steps back, under His eye.

A few episodes in, a handful of handmaids are offed in such a way that would make a piano falling out of the sky and killing them seem restrained and poetic.

The fourth season of the dystopian drama, which premieres Wednesday, begins where the third ends—June has been shot—but of course, she survives, because what is this show without its main object of torture? As if she weren’t enough of a target herself, a few episodes in, a handful of handmaids are offed in such a way that would make a piano falling out of the sky and killing them seem restrained and poetic. From what I’ve seen in the first eight episodes shared with reviewers, this season takes a turn around episode six, and the trauma shifts to be primarily psychological. Still, the relentlessness of the violence endured by the characters, both internally and externally, makes it hard to see much else. It’s overwhelming.

The most visceral power of The Handmaid’s Tale remains in the flashbacks that illustrate the unsettlingly thin veil between what we have come to know as normal far-right posturing and totalitarianism. One flashback in particular has stuck with me for its quiet escalation of a very real barrier to abortion access at present. A few episodes into the new season, Janine—who should be protected at all costs, do I make myself clear, writers’ room?!—is seeking abortion care in the Before Times. She winds up at a crisis pregnancy center by accident, where she is asked why she wants an abortion, whether she is religious, if she has told the “father.” The “nurse,” who tells her that she wanted to help pregnant women because of the declining birth rate, paints a picture of abortion care as a dangerous procedure that can result in sterility and infection. A whiteboard with illustrations depicting the size of a fetus at different stages overwhelms the small room. Eventually, the nurse tells Janine that they don’t provide abortions at the crisis pregnancy center, quickly following up with a graphic description of an abortion procedure that Janine does not even need—she’s still in her first trimester—emphasizing the word “baby” as she proceeds. Janine leaves, clearly disturbed and upset.

Later, the flashback picks up again, though this time, Janine has found a physician. “Did you search abortion clinics online and wind up there?” the doctor asks gently after Janine nervously babbles all her reasons for wanting abortion care: she already has one kid, her job is barely enough to cover the both of them, she was considering going back to school. The doctor stops her, and asks if she wants to be pregnant and whether she’s comfortable with her decision. When Janine says no, she doesn’t want to be pregnant, and yes, she came to this conclusion on her own, the doctor tells her that she doesn’t need to know anything else. “They’re called crisis pregnancy centers and they lie to women to convince them to keep unwanted pregnancies,” she explains. “I’m sorry you had to go through that.” She hands over medication that she took from a locked cabinet to Janine, with instructions for taking the pills to induce an abortion at home and what to expect. “That’s it?” Janine says, surprised. “You already did the hard part,” the doctor replies.

Janine’s crisis pregnancy center flashback, on the other hand, feels meaningful because it so acutely draws our attention to a specific, current duplicity that affects pregnant people every day.

Though The Handmaid’s Tale was always the sort of TV show I had to watch in chunks, usually with a stiff drink, in its first season it was harder to look away. It premiered in the early days of the Trump administration, when our brains were still adjusting to the unnatural tenor of a president who tweeted his every unedited thought, guided by cultural conservatism and prejudice over policy. The eerie world-building of Gilead combined with the sickly familiarity of the flashbacks made for compelling television, and the shocks felt like they were there to jolt us awake and to warn against complacency. But as the violence has escalated and continued, it feels gratuitous, a repeated wallop over the head with a cast-iron skillet. It hurts, though at this point there doesn’t seem to be a lesson or any meaning at all in the pain. Janine’s crisis pregnancy center flashback, on the other hand, feels meaningful because it so acutely draws our attention to a specific, current duplicity that affects pregnant people every day.

This is the second television storyline that includes crisis pregnancy centers in recent memory—hello, The Bold Type, which was preceded by that episode of The L Word back in 2007. That it’s also being covered now in The Handmaid’s Tale feels doubly significant, since the premise of the show hinges on reproductive autonomy. Going beyond the “choice” storyline into barriers to accessing abortion care is a big deal for TV. Even just a few years ago, as Hillary Kelly pointed out in an essay for Mother Jones in 2019, all too often abortion on television was written as if it’s something that can be sought out and accessed easily, which is, of course, true for pregnant people of only a certain class and geography. “Yet the real-life problems with American abortion are seldom found on television,” she writes. “Even on prestige TV, with all its money and daring, women don’t have any trouble getting to a provider or terminating a pregnancy beyond the first trimester.” To be clear, if it’s addressed at all it’s still overwhelmingly written as Kelly describes, but I’ll take these recent examples as a sign of a meaningful turn.

If asked, I wouldn’t describe The Handmaid’s Tale nor this season in particular as bad. On the contrary—the acting is superb, the writing is nuanced, and the porousness between our world and Gilead is compelling, if also unnerving. But my world is already so saturated in violence and death, particularly after more than a year of a global pandemic, so I find myself unable to take on the horrors of an imagined timeline after a long day reading reports about our broken health care system, the continued murder of Black people by the police, and the ever-burbling determinedness of Marjorie Taylor Greene and her ilk to march us straight to Gilead. In any case, blessed day, and may the Lord keep the gateway to Gilead firmly closed.