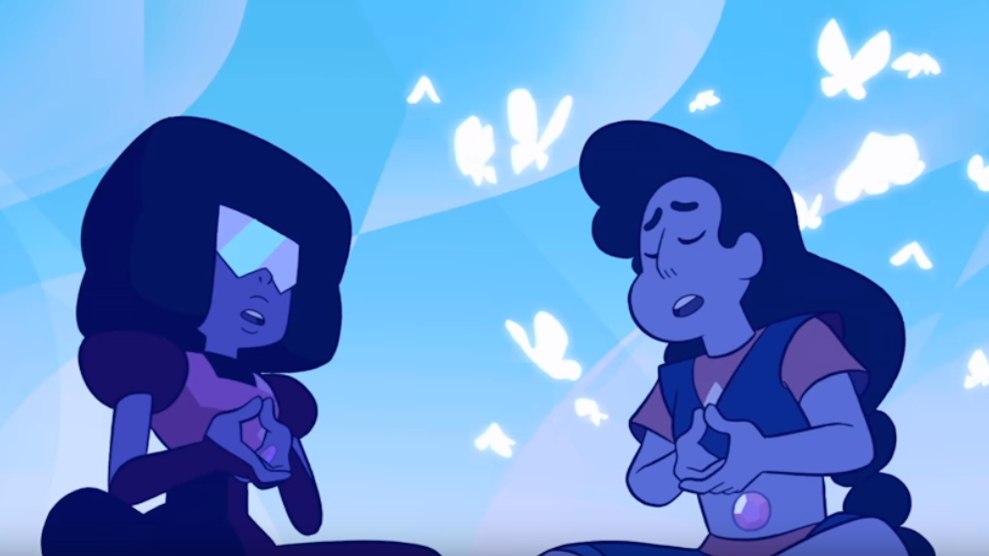 Garnett and Stevonnie in a pensive state during the episode "Mindful Education."(Cartoon Network/Youtube)

An intrusive thought. It’s that notion you hate, that thing you can’t let go of. It forms a pit in your stomach and takes you down a hole you never, ever wanted or needed to go down.

It’s also the focus of “Here Comes a Thought,” a song on the 2013 show Steven Universe. The animated show may be known for its diverse characters or its fascinating world, but the best thing it ever did for me was validate the experience of a mentally ill person just trying their best.

I discovered Steven Universe at a fraught time in my life. I was severely depressed and extraordinarily anxious, and searching for any outlet as I navigated the end of high school. The 10–12 minute episodes and the always pleasant tunes soon became a comfort, as they did for plenty of queer kids.

The show’s Crystal Gems are a group of anthropomorphized gemstones who have banded together to protect the Earth from their aristocratic oppressors. Along the way they have been tasked with rearing the title character, Steven Universe, as he navigates the half-gem, half-human experience.

In the episode “Mindful Education,” singer Estelle (made famous by “American Boy”) and the second half of the duo Aly&AJ, AJ Michalka, sing “Here Comes a Thought.” In the lead-up to the song, Steven and Connie have fused into Stevonnie, who is voiced by Michalka, and they are struggling to fit into this new and odd being.

A fusion is when two or more gems combine together. They are rare in the universe of the show; the only other fusion Stevonnie knows is their pseudo-parent Garnett. Sapphire and Ruby, who make up Garnett (Estelle), are in love, and have chosen to permanently be Garnett. Fusions are not two-halves, but one whole. The emotions they experience are distinctly their own, even if they are directly influenced by two individuals’ thoughts.

It’s the “what if I ran my hand over this flame?” or, “what if that person using a knife cut their finger off?” thought.

In the song, Garnett is lamenting their struggle to be a confident and strong fusion—the struggle to form a partnership—to Stevonnie, a budding, confused fusion, who feels the connection and desire to be one, yet cannot articulate the complicated feelings the journey evokes. It makes sense why Stevonnie is feeling adrift; imagine having someone else, even your partner, in your head!

The song can be read like a couple’s therapy session during which Garnett mentors Stevonnie. But the beauty of the song is that it actually validates something much more uncomfortable than a couple’s spat. Stevonnie is uneasy about the new thoughts popping into their head, which have emerged since they became a fusion. When Garnett (Estelle) describes the thoughts that are bringing Stevonnie down—“something you did that failed to be charming,” or “things that you said are suddenly swarming”—they know that this is what Stevonnie needs to hear as the young fusion struggles to settle into their new identity. The state of being a fusion, in this instance, represents the internal struggle. The anxious thoughts about who you are and what you want to be; the carte blanche horrible things that no one needs to think about, the need to go one way but wanting another—they’re all in the subtext of this song.

Garnett has been through the entire struggle, and they validate it for Stevonnie by offering them peace: “Take a moment to think of just / flexibility, love, and trust.” Stevonnie (Michalka) proceeds to repeat the entire verse back to Garnett, and begins to understand and to feel a little bit better.

As a mentally ill person who is constantly anxious about saying the right thing, about being good and fair and ethical, that shit hits different, to put it lightly. Intrusive thoughts can come with any mental illness, but the “neurotypical” person understands them, too. It’s the “what if I ran my hand over this flame?” or, “what if that person using a knife cut their finger off?” thought.

But for a mentally ill person it can take the form of debilitating and sometimes deadly notions. It varies from person to person, but that’s why the song is so powerful. It is not putting stipulations on which thoughts are okay and which ones are not—that only leads you down a dark path. As Stevonnie sings: “All these little things seem to matter so much / That they confuse me / That I might lose me.”

These thoughts make so many of us feel ashamed, and like no one else understands. And in this shame we get lost, and it gets worse. But as Garnett croons at the end, “You’ve got nothing to fear. I’m here, I’m here, I’m here.” If you’re having intrusive thoughts, you’re never alone.