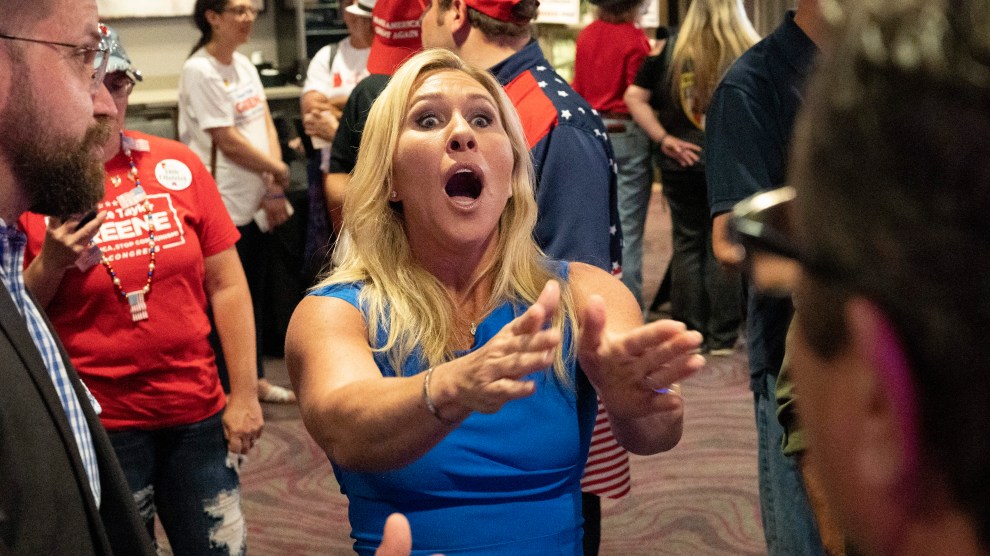 During Judge Ketanji Brown Jackson’s Supreme Court confirmation hearings, Greene levied the accusation against the Democratic Party and a select group of moderate Republicans, all because of a bad-faith argument that Jackson was lenient when sentencing child-pornography defendants. Greene’s enthusiasm for smearing others as pedophiles isn’t surprising, given her affinity for QAnon and the pedophilia hysteria that goes along with it.

So I guess that makes it “funny,” in a backwards and depressing way, that Greene hired Milo Yiannopoulos as an unpaid intern. Yiannopoulos even posted a photo of his badge to Telegram.

For those blissfully unfamiliar with Yiannopoulos’ comments on sex between children and adults, all you really need to know is that they were bad enough for the editor-in-chief of Breitbart News to call them “indefensible” and “appalling.” Yiannopoulos had defended sex between adults and boys as young as 13 and bashed child sex abuse victims who came forward as adults. He has since said that his comments were an effort to cope with the sex abuse he experienced as a child. Yiannopoulos resigned from Breitbart in 2017.

Since then, Yiannopoulos has gone on to be a fundamental part of a new push from the far-right to fundamentally change the Catholic Church in the United States and across the world. As Kathryn Joyce reported for us earlier this year:

In 2018, [Yiannopoulos] published a book, Diabolical: How Pope Francis Has Betrayed Clerical Abuse Victims Like Me—and Why He Has to Go, that tied his defense of the remarks he’d made—that he’d been glibly processing his own childhood sexual abuse—to the broader crisis in the Catholic Church. Soon, he was welcomed by right-wing Catholic news outlets like Church Militant and LifeSiteNews, and a popular Catholic apologetics YouTube show hosted by firebrand and now anti-vaccine activist Patrick Coffin, which together represent some of the most vitriolic critics of the pope online. In early 2021, Yiannopoulos completed the journey, announcing to LifeSiteNews that returning to a traditionalist form of Catholicism had helped him become “ex-gay,” and he now planned to build a Catholic-based conversion therapy clinic in Florida, to be called the Milo Center.

As Yiannopoulos conducted a publicity tour around the alternative media universe of the Catholic right, he theatrically threw away an engagement ring he called his “sodomy stone” and quipped about the need to “make the Vatican straight again” and “make America homophobic again.” By July, he’d become a regular columnist at Church Militant, where he paired his trademark acidity with a laser fixation on the “cult of homosexualism,” which he described as “a reimagining of a very old, pagan form of worship.” He also claimed that women who miscarry after receiving Covid-19 vaccinations have effectively aborted their children, and declared that “sometimes one feels the only good bishop is a dead bishop.” By fall, he was appearing on Church Militant’s home-shopping network, flogging an $88 “Adoring Virgin” icon—a “good Mary,” Yiannopoulos promised, unlike some less physically attractive depictions—and a CD set of him reading Psalms and Proverbs for $75.

As usual, anything Yiannopouls says should be taken with a grain of salt, given his propensity to troll. That includes his internship. But, come on. There’s an entire section of his Wikipedia page subtitled “Remarks on paedophilia and child sexual abuse.”

What sort of a statement is Greene hoping to make by affiliating with someone whose rhetoric is harmful enough to have gotten him banned from both Twitter and Facebook? And to have gotten him to resign from, of all places, Breitbart?

“So I have an intern that was raped by a priest as a young teen, was gay, has offended everyone at some point, turned his life back to Jesus and Church, and changed his life,” Marjorie Taylor Greene told The Daily Beast. “Great story!” https://t.co/uVPkw3Zeeb

If Greene can accuse others of being “pro-pedophilia” for supporting Judge Jackson, does she think she’s immune from being the subject of those same jeers for supporting someone who has actually belittled the experiences of child sexual assault survivors?