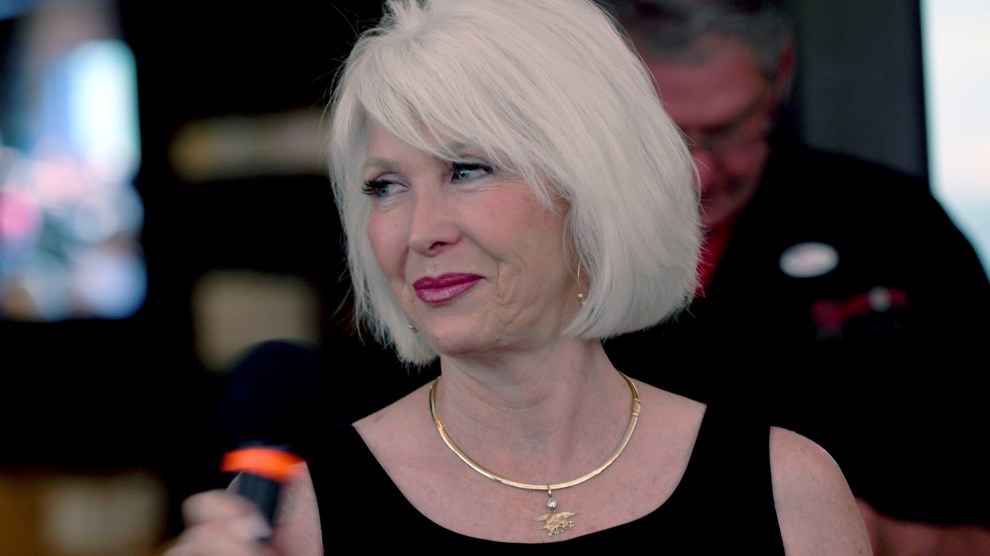 Tina Peters—the Republican Colorado county election official who tried to prove that the 2020 election was stolen by allegedly orchestrating a plan to copy election software from voting machines—is in big trouble.

Last week, the election-denying Mesa County clerk (who lost her bid for the state’s top election position) pleaded not guilty to a slew of felony and misdemeanor charges related to her alleged breach of her office’s election equipment.

As I wrote in June, here’s what is Peters supposedly did:

In an effort to prove that the election had been rigged against Donald Trump, Peters attended an election equipment software update and obtained copies of election information, which later wound up online, according to an indictment…To perpetrate the scheme, Peters allegedly used a local IT consultant’s ID card without his knowledge. Peters has been charged with three misdemeanors and seven felonies, including conspiracy to commit criminal impersonation and identity theft.

The wise thing to do, when charged with seven felonies, would be to lie low and listen to your lawyers. But Peters, who is not known for her competence, just can’t stop talking to the press.

In June, she told the New York Times that Rep. Lauren Boebert (R-Colo.) had “encouraged me to go forward with the imaging” of the voting machine data. While Boebert denies this, it’s difficult to understate just how reckless this comment is for someone accused of illegally copying election information.

But that’s not all. After her arraignment last week, Peters appeared on MyPillow guy Mike Lindell’s TV network to announce that she had been subpoenaed by former Dominion Voting Systems director of product strategy and security Eric Coomer in his defamation case against Lindell. After Coomer posted a series of anti-Trump messages to Facebook, conspiracy theorists accused him of rigging the election on Biden’s behalf. Coomer is now suing the biggest proponents of the conspiracy theory, including Lindell, for defamation. But the ongoing litigation hasn’t stopped Peters from repeating the very lies that are landing her allies in court.

Tina Peters had her arraignment yesterday for 7 felonies after allegedly providing confidential voter data to Mike Lindell while serving as Mesa (CO) Clerk. She said as she walked in to court she was served with a subpoena from the Dominion security chief, who she says is Antifa. pic.twitter.com/41VO3WVdNw

“Eric Coomer, I won’t even call him a gentleman, I will call him antifa,” Peters said. “He was the one that was in charge of the patents for the algorithm that is inside the Dominion voting machine and actually bragged on an antifa call that he was a member of that he would make sure that Trump wouldn’t get in, that he made effing sure of it.” That alleged “antifa conference call” probably never happened, according to a Denver District Court judge. Instead, it was likely fabricated by podcaster Joe Oltmann before being amplified by Peters and Lindell.

Typically, when you’re subpoenaed in a defamation case, you don’t go on television repeating the very claims over which the case has been filed. But, again, Tina Peters is anything but typical.