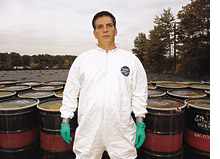 Bob Spiegel was working as a pastry chef at a banquet in 1991 when the ice sculptor at the affair asked him a question that sounded like something out of an old Monty Python routine:

“Want to see some green rabbits?”

Spiegel followed his co-worker to the nearby site of the Chemical Insecticide Corp., an abandoned factory in Edison, New Jersey, where a toxic mix of arsenic, lead, PCBs, and dioxins had been left behind. “There were green rabbits,” Spiegel recalls, still amazed by what he witnessed a decade ago. Residue from an herbicide called dinoseb, banned by federal regulators for causing birth defects, had given the undercoats of rabbits living around the sprawling plant an eerie green tint.

Spiegel was even more alarmed to discover that children were playing in nearby streams contaminated with chemicals from the site, which was already designated for cleanup under the federal Superfund program. If the rabbits were turning green from the chemicals, he wondered, what about the kids playing there?

What he saw that day convinced Spiegel to get out of the kitchen and into the community. He videotaped children in the chemical-laced water and mailed the tapes to the Environmental Protection Agency — and to local media outlets. But federal regulators failed to act, so he and the culinary ice sculptor, John Shersick, founded a group called the Edison Wetlands Association, rented a local movie theater, and showed the tapes to a standing-room-only crowd. “We scared the hell out of everybody,” Spiegel says. The EPA immediately scheduled a public meeting.

Since then, Spiegel has devoted himself to getting the site cleaned up. A square, muscular 40-year-old with graying hair styled in a military crew cut, he combines traditional suit-and-tie lobbying and in-depth research with more gonzo tactics. He has held press conferences at the Superfund site, filmed a TV news crew being physically ejected from Chemical Insecticide’s offices, and provided reporters with government and company memos obtained through the Freedom of Information Act. Once, when the regional EPA office permitted Spiegel to photocopy a handful of company documents, the government clerk in charge left early because she was ill. Spiegel stuck around all night and copied everything in the file cabinet.

Cleaning up the site will cost an estimated $60 million — but so far, the government has spent only $14 million to put a huge rubber cap on more than 100,000 cubic yards of contaminated soil at the facility and to erect a fence to keep people out. After Spiegel finally convinced the EPA to dig the arsenic out of two streambeds, the Edison Wetlands Association made sure the agency planted 3,000 native trees and shrubs along the scarred banks of the streams. “Without Bob, I don’t know what we would have done,” says Gail Horvath, whose family has lived across the railroad tracks from the site for 25 years. “He wouldn’t let the issue drop.”

Two years ago, the wetlands association finally hired Spiegel as its first executive director. (“He worked full time for eight years,” explains a board member. “We decided it was time to pay him.”) At the time, it looked like Spiegel’s years of activism were about to pay off — the final phase of the cleanup was set to begin last fall, with $40 million budgeted for soil removal. Then, in June, lawmakers learned that the Bush administration planned to cut Edison and 32 other Superfund sites from the budget, postponing cleanup for years.

Spiegel fought hard to force the administration to restore at least some of the money. He testified before Congress, pointing out that the rubber cap at the facility is leaking, allowing toxic chemicals to leach into nearby streams. To underscore the point, he mailed stuffed rabbits sprayed with green paint to members of Congress.

On October 1, EPA administrator Christie Whitman, a former governor of New Jersey, showed up at the Superfund site to announce that the government would spend $19 million to begin removing contaminated soil. There had been little advance notice, but Spiegel found out about her visit. As her car drove slowly past the facility, she was greeted by a crowd of angry Edison residents standing in front of a row of wooden tombstones, each bearing a different epitaph: Superfund 1980-2002 RIP. Clean Air Act RIP. Environmental Justice RIP. The local media covered the protest, and what was supposed to have been a photo op turned into a public relations disaster.

Superfund was a promise Congress made to the American people,” says Spiegel. “George Bush and Christie Whitman are breaking that promise.”