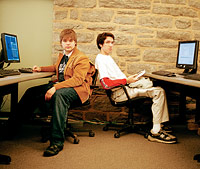 Swarthmore college sophomores Nelson
Pavlosky and Luke Smith weren’t old enough to vote in the last presidential election. Frankly,
they aren’t even all that into voting.

“We’re not voting nerds,” protests Smith, a rumpled-looking guy
with the downy beginnings of a blond beard.

“Ugh, not at all,” chimes in Pavlosky, whose lanky frame is swallowed
up by a giant red hoodie.”Don’t call us voting-machine activists!”

And yet these 19-year-olds are locked in a high-profile showdown with
electronic voting-machine manufacturer Diebold. Their legal battle is illuminating serious
problems with paperless voting and could forever alter the corporate practice of keeping embarrassing
material off the Internet by invoking the Digital Millennium Copyright Act. Not bad for two kids
who haven’t even declared their majors yet.

The adventure began in spring 2003, when a hacker broke into Diebold’s
computer system and unearthed 15,000 internal emails. In them, Diebold employees fret over the
voting machines’ vulnerability to hackers and their alarming habit of going on the fritz. “I
need some answers!” one frantic employee wrote from Florida regarding the 2000 recount. “Precinct
216 gave Al Gore a minus 16,022 [votes] when it was uploaded. Will someone please explain this so
that I have the information to give the auditor instead of standing here ‘looking dumb.'”

The emails were promptly posted all over the Internet. Diebold responded
by sending a flurry of cease-and-desist letters to the various Internet service providers (ISPs),
claiming that the information was protected by the Digital Millennium Copyright Act. Passed by
Congress in 1998, the DMCA was designed to guard companies against online piracy. But almost immediately
corporations learned that if they alleged that embarrassing posts actually violated copyright
protections, ISPs would take them down for fear of being held liable. Sure enough, every ISP that
received a threat from Diebold immediately shut down the offending site.

Which is where our teenagers come in.

Pavlosky and Smith—who hail from Morris Plains, New Jersey,
and Sandusky, Ohio, respectively—were already well schooled in the DMCA. Their pet cause
is the open exchange of ideas on the web, often called the “free culture” or “open source” movement.
“Overprotected copyright is a theft from the public,” says Smith. “And that is a critical issue
for us, because we want to promote public discourse.” The duo had already founded the Swarthmore
Coalition for the Digital Commons (SCDC)—a hodgepodge of libertarians, ivory-tower types,
and computer geeks—which meets regularly to discuss the Orwell-ian ramifications of discouraging
the free flow of ideas. So when they heard about the quashing of the Diebold emails, Smith and Pavlosky
posted all 15,000 on their Swarthmore-hosted website. When Diebold’s ultimatum arrived, Swarthmore
administrators predictably pulled the plug. But Pavlosky and Smith were ready. First, they asked
fellow student activists nationwide to take turns posting the material. And second, they sued
Diebold for abusing copyright law.

“We were scared out of our minds!” says Pavlosky, his dark eyes widening.
“We thought we were kissing our futures goodbye.” Ohio-based Diebold had revenues of $2.1 billion
last year, and the two students and their pro bono legal team fully expected a countersuit. Instead,
their suit attracted media attention, and Congressman Dennis Kucinich asked the House Judiciary
Committee to investigate, writing, “Powerful parties should not be permitted to misuse copyright
as a tool for limiting bad press and barring access to legitimate consumer information.”

Three days later, Diebold announced that it would no longer try to stop
web distribution of its memos. “We just chose not to file for copyright infringement, although
it was allowed under the law,” says Diebold spokes-man David Bear. “We certainly hope to negotiate
a settlement in the lawsuit that they filed against us.”

Pavlosky and Smith were stunned, and thrilled. “We knew we had a good
case, but we’re still surprised that Diebold didn’t come after us for it,” says Pavlosky. They don’t
intend to settle; the memos are back up on their website, and a ruling on their case is forthcoming.
And Pavlosky and Smith have become campus celebrities: A Swarthmore administrator publicly praised
their activism; a German television crew covered a SCDC meeting; and a Hollywood filmmaker called
to propose a movie (“A comedy,” says a somewhat bewildered Smith). The sophomores are using the
momentum to organize a national “Free Culture” student summit, planned for early 2005. Meanwhile,
“My mom wants to know if I’m going to class,” says Smith, grimacing.