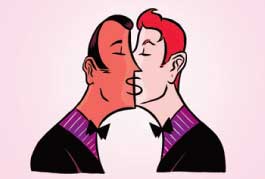 Gay marriage is usually cast as an issue of human rights (for supporters) or immorality  (for opponents), but what about fiscal responsibility? Herewith, some of the annual  economic benefits of legalizing gay marriage:

Same-sex couples marry and move into a higher tax bracket, boosting federal taxes by:
$400 to $700 million

Newly formed gay households move up in income and are cut from programs such as Medicaid, resulting in savings of:
$50 to $200 million

Uninsured gays and lesbians, whose health care costs are now paid by the government, join their spouses’ insurance plans. If a third do so, federal costs drop by:
$190 million

If half the same-sex couples now living together get married (the rate seen in Vermont and Massachusetts) and spend a quarter of what straight couples do, it results in a wedding-industry boon of:
$2 billion