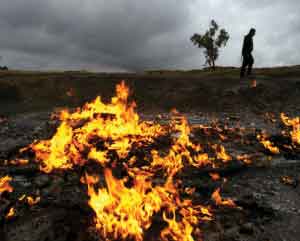 in our name: “We owe the Iraqis because we’ve been letting them down ever since the first Gulf War. Your conscience is not clean just because you’re a peace demonstrator. The government is us and the moral obligation is with us as a society. The administration proposed the war; Congress authorized it; we are responsible for it. We can wash our conscience clean with a new election, but there has to be some sort of obligation that falls to us as a society for what our government does in our name.” —General Anthony Zinni (usmc, retired), former centcom commander

committed: “I’m not very keen to see the Americans just run away because Iraq is facing a crisis. Americans should understand their obligation, their commitment.” —Tariq al-Hashimi, deputy prime minister of Iraq

bad cop: “The U.S. is a very bad occupier because while it prides itself on taking the moral high ground, it has failed to provide law and order, which is the first duty of an occupier. The iron logic of the situation is that if you can’t terrorize, you can’t occupy. The rest is rubbish.” —Edward Luttwak, Center for Strategic and International Studies

falling down: “It does create a moral problem when you destroy a country’s infrastructure as we have in Iraq. We’re worried about this bridge that came down in Minneapolis, but we’ve knocked down practically all the major bridges in Iraq. We have some obligation to help rebuild some of the things we’ve destroyed. It will do a lot to improve our position in the world.” —George McGovern, coauthor of Out of Iraq

take me to your leader: “The U.S. has to show leadership in responding to the humanitarian issues. If we don’t see this leadership coming from the U.S., other members of the international community are not going to follow.” —Kristele Younes, Refugees International

not so super power: “While I feel strongly that after invading Iraq we have a moral obligation to protect Iraqis, it seems that we simply don’t have the means to live up to our obligation. U.S. forces have been unable to prevent a pernicious and complex civil war which has killed tens of thousands of Iraqi civilians. We haven’t been able to prevent the hemorrhaging of 2 million Iraqi refugees. We haven’t been able to stop Shiite militias and Sunni death squads from wreaking death and destruction. So despite our efforts, we simply can’t control the violence in Iraq.” —Senator Christopher Dodd (D-Conn.)

beyond repair: “It is important to avoid confusing a moral obligation with an achievable mission. Arguably we have a moral obligation to stop this civil war that is going on. I don’t blame the civil war on the U.S., but you can argue that we have a moral obligation. But I would also argue that we don’t have the ability to stop the civil war. My lesson from my time [as the ambassador to Croatia] in the former Yugoslavia is this: The tragedy is not the breakup of a country—it is the violence. God didn’t create a single country. These are human creations and if they don’t serve the human needs, then, you know, so be it.” —Peter Galbraith, adviser to the Iraqi Kurdish government

friends in need: “We have to honor our commitments and provide safe haven to Iraqi interpreters and those who have worked very closely with us. There is certainly this specter for this administration: If you start admitting large numbers of Iraqis, then you have admitted that you have a failure and there is a rush to the door for the innocents to get out.” —Maj. General Paul Eaton (retired), oversaw training of Iraqi security forces 2003-2004

worse than vietnam: “I think the aftermath will be more serious than Vietnam. It will be more of a traumatic experience. There will be a series of images like the roof of the American Embassy in Saigon. That may be pictures of children in the streets of Baghdad. There will be some images that dominate our failure.” —Colonel Sam Gardiner (usaf, retired), military analyst and Pentagon consultant

our mess: “We put the Iraqis in this mess and now we’re bailing on them. I don’t know how you deal with that. Obviously we’ve got an enormous moral responsibility for making this mess with no plan to fix it, and just kind of dithering as it gets worse and worse. There’s no way to get that balance sheet right.” —Colonel T.X. Hammes (usmc, retired), counterinsurgency expert

un-american: “We can’t just turn around and arbitrarily leave because the problem became too difficult. That’s not what America is about. If we turn our back on Iraq, it is my professional opinion that we will have a bloodbath in Iraq. The repercussions for our foreign policy are going to be huge.” —Major Daniel Morgan, School of Advanced Military Studies

blame game: “You want to draw down? Fine. What are your troops going to do when they sit there in their bunkers and innocent people are dying? There are no easy answers. Whatever happens there, whether we are there or not, we are going to be blamed. You have to get used to it. I meet a lot with people from the region and I start, ‘It’s all my fault. Blame me.'” —Judith Yaphe, National Defense University 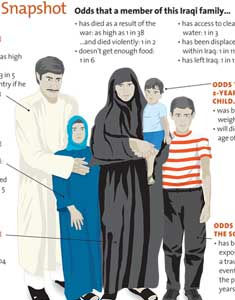