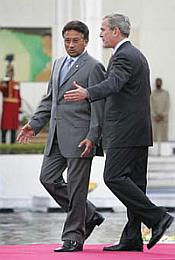 The New York Times reports today that Pervez Musharraf is acting quickly to release detainees who were held and interrogated with no paper trail or legal protections to get rid of evidence of the secret program. Detainees have been warned not to talk about their experiences, and in at least one case, an Arab man was released in Gaza, a direly impoverished region surrounded on all sides by Israel.

The Times article reveals that much of the ongoing political struggle in Pakistan stems from conflicts about the detention program. The political conflict began, you may remember, as a power struggle between Musharraf and Iftikar Chaudhry, the chief justice of the Supreme Court—who, in turns out, was attempting to force the dictator to bring the detainees into the court system. Musharraf subsequently removed Chaudhry, and lawyers took to the streets—lawyers who, in some cases, were attempting to represent the disappeared suspects.

One rationale Musharraf gave for imposing emergency rule in November was that the court was releasing suspected terrorists. In fact, it was simply demanding that detainees be charged or freed. You may also recall that Musharraf wasted no time rounding up and jailing human rights workers—who were also quite plausibly advocating for detainees. (The Times‘ sources are identified as “lawyers and human rights officials.”)

A week into his emergency rule, Musharraf reinvigorated amended the 1952 Army Act “to allow civilians to be tried by military tribunals for general offenses. The tribunals are closed to the public and offer no right of appeal,” according to the Times. For good measure, the amendment was made retroactive to January 2003, leaving no way to track any criminal charges since then.

To justify the move, a government spokesman said, “Sometimes it becomes difficult to prove a case, but you have reasons that a person poses a threat to humanity and to society.”

Pakistan was almost certainly working with the United States in its efforts to interrogate, if not prosecute, the suspected terrorists. One recently released detainee reports that a white, English-speaking interrogator was in the room as his Pakistani captors tortured him.

Although the idea of U.S. officials presiding over the detention and torture of suspected terrorists may not scandalize you anymore, their participation in the detention and torture of ethnic minorities whose only crime is to support regional autonomy ought to. Among the disappeared are thousands of Baluchi and Sindhi nationalists who they have nothing to do with the war on terror.