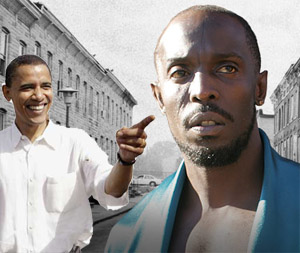 So Barack Obama says his favorite TV show is The Wire. And his favorite character, he tells the Las Vegas Sun, is Omar Little, the charismatic, sawed-off shotgun toting, Honey Nut Cheerios-eating, gay stickup artist. “That’s not an endorsement. He’s not my favorite person, but he’s a fascinating character,” says Obama, displaying both admirable honesty and pop-culture cred, yet risking alienating the demographic (i.e., women) that will never forgive Omar for helping set up Stringer Bell. And all the culture warriors who will take issue with Obama calling the gangster “sort of a Robin Hood.” But picking your favorite Wire character is all about moral ambiguity—a real minefield for a politician who thinks the answers to these kinds of questions really matter. All the cops are corrupt or boozers or philanderers. The politicians are weasels. And the drug dealers and journalists? Enough said. The only mildly politically safe Wire character I can think of is Lester Freamon, whose biggest sin is a love of miniature furniture. If you want to get a little more daring, you could go for rookie middle-school teacher and ex-police Roland “Prez” Pryzbylewski—but don’t forget that he’s an accidental cop killer.

If you’ve got ideas for which Wire character each candidate should endorse—or even better, which character reminds you of which candidate—leave a comment.