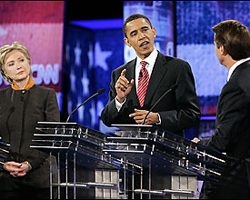 It was bound to happen. If you insist on 10,000 debates in a four or five month period, you are going to cover every policy difference, philosophical difference, and tonal difference. It’s all over but the shouting, as they say.

And that’s what we got tonight with the Democrats’ debate in South Carolina: the shouting. Barack Obama and Hillary Clinton traded so many jabs and talked over each other so many times that it’s hard to remember any one line—the only thing that sticks in the mind, just half an hour later, is the sound of constant squabbling.

And it’s bad for the Democratic Party. Every time the Democratic candidates launch attacks on each other, they provide the eventual Republican nominee with ammunition. Not to mention the fact that they obscure their strengths and highlight their weaknesses.

The media coverage is already all about “tensions flaring.” Immediately after the debate ended, Anderson Cooper started reshowing the debate’s contentious moments. I’m not going to recap any of them here—you can read about them elsewhere or see them on YouTube, but suffice to say, they were simply sharper versions of what you have already heard.

Edwards, who struggled for air time, introduced the idea of John McCain as the presumptive Republican nominee. The point was that only he could beat McCain. Clinton replied that if McCain is the nominee, only she has the foreign policy chops to go toe-to-toe with the Arizona senator. Obama responded by saying that Clinton’s argument was essentially, “I’m the closest to McCain.” The better argument for a progressive, Obama argued, is that we need a whole new foreign policy paradigm that rejects the conventional wisdom and adopts a whole new way of thinking.

The second worthwhile moment was on the topic of health care. Obama reiterated his point that he doesn’t believe in mandates; his belief is that people want health care and simply can’t afford it. If you make health care more affordable, the 47 million uninsured will disappear because they will buy into the system voluntarily. Both Edwards and Clinton attacked Obama for defending a plan that is not truly universal.

Obama was busy fending off blows the entire night: at first just from Clinton, but later from both Clinton and Edwards. (Edwards has to stick around, if only for his role in these debates. He is a pressure valve—the moderators go to him when things get too tense between HRC and BHO.) Pundits will say that Obama’s place at the center of the action means he won. He absorbed a ton of blows but gave better than he got. But in truth, every Democrat was a loser today.