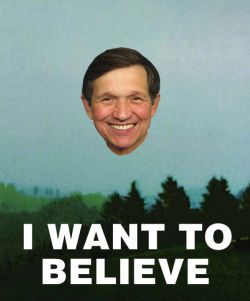 Dennis Kucinich has taken a lot of flack for saying that he once saw an unidentified flying object near Shirley MacLaine’s house back in 1982. The Wall Street Journal just did a front-page story on it, adding to the Kucinich-as-silly-person storyline. But what if he really did see something—just not an alien spaceship? That’s the skeptical-yet-speculative theory being floated over at Cannonfire:

The sighting took place in Washington state near Mt. Ranier, where the “flying saucer” craze was born.

Judging from the description of the three vehicles witnessed that day, I theorize that the party saw a test of prototype UAVs, or drones. Such unmanned reconnaissance craft were little-known at the time. They are well-known nowadays, since they play a major role in Iraq and Afghanistan.

Although the early development of unmanned craft is not easy for outsiders to trace, these devices do have a long history. Marilyn Monroe, in the days before she had that name, once worked for a company producing the first mass-produced UAVs.

The Kucinich sighting took place in Graham, Washington, situated directly between Mount Ranier and McChord Air Force Base. (The mountain is some twenty miles away from the base.) The report indicates that the craft were flying toward McChord. After the flyover, Kucinich’s party saw military helicopters in the area.

Then how to explain MacLaine’s claim that during the sighting Kucinich felt “a connection in his heart and heard directions in his mind”? No doubt the Department of Peace would want to keep that love-drone technology in its arsenal.