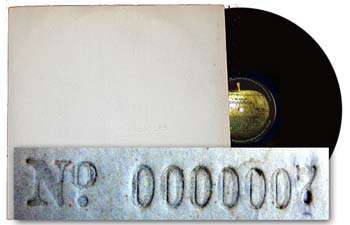 Via Uncut comes news that an exceedingly rare copy of the Beatles’ 1968 “White Album” is set for auction this week, and is likely to bring bids of up to £5000 ($10,000). The record has a serial number of 00000007 (kind of like Mr. Burns’ Social Security number) and since it’s rumored that the first ten copies of the album were all given to band members, that would make this “the lowest numbered original mono copy” that has ever been up for auction. Is this silly, or a justifiable appreciation of a landmark work of art?

I’ve never had much of a “collector’s” mindset when it comes to music, although my preference for vinyl’s sound forced me to search (and often pay high prices) for hard-to-find records in the pre-internet days. For a while, the Pixies’ Doolittle just wasn’t anywhere on vinyl, and when I finally found a copy I paid like $25, which was a lot back then. Jeez, It’s still a lot. But for me, it’s always been about the music on the record, not the record itself, although I do have to admit to a certain geeky pride when I flip through my stacks and see the rare Warsaw record or a hard-to-find Kraftwerk LP. 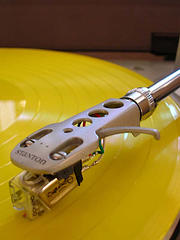 However, these days it’s harder and harder to justify the shelf space. My 1-terabyte hard drive holds thousands of albums, all of which I can access at the touch of a button, and I have to admit I’ve downloaded an mp3 of a song I need for a project because the original record is all the way across the room. Even though the physicality and warm sound of vinyl still attracts me, if I have to pack all 3000 of my records up again for another move, I’ll probably roll over and die.

So, in this age of WiFi and iPods, it may seem all the more ridiculous to shell out 10 grand for a rare copy of an album you can enjoy for free (or cheap) just about anywhere at any time. On the other hand, does the cheapness of our download culture make rare records, wiped delicately with a dust cloth and placed carefully on a turntable, the “slow food” of today’s music distribution system? I’ll admit it, there’s a part of me that wishes I had $10,001 so I could outbid everybody else. Oh well: la la la la life goes on.