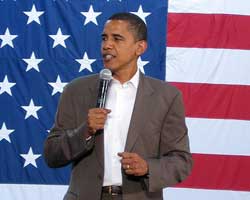 Barack Obama is a secret Muslim who refuses to say the Pledge of Allegiance. During the Democratic primary campaign, the junior senator from Illinois has been hit repeatedly by virulent viral emails pushing false claims like these. The latest: Obama, due to his Muslim background, secretly favors Palestinians over Israelis.

An unsourced email being disseminated claims that “someone taped former Muslim Barack HUSSEIN Obama at a black church when he was in South Carolina” and that Obama said:

It’s clear that we give too much money to Israel. [cheers] Why… do you know that every American gives approx .20 cents A DAY to Israel? [jeers] We keep hearing how tough the Israelis are… how great an ‘ally’ they are… –but what if we gave the SAME AMOUNT of money we gave THEM to the poor Palestinians–I bet THAT would bring them finally to the table. We could have a two-state solution… a two-state solution–just like former President Carter outlined in his latest book. We can’t have peace in the Middle East until we solve that problem down in Palestine. George Bush should have thought about that before he went into Iraq…[etc.]

The email goes on to note that Obama sounds “a GREAT DEAL like Malcolm X.” It asks, “Instead of the ‘Manchurian Candidate,’ is Obama the secret ‘Farrakan Candidate'”? It then seeks to explain his purported anti-Israel bias:

Will Barrack’s [sic] Muslim roots cause him to favor the Palestinians against Israel?

Because he’s a “person of color,” will Obama be more sympathetic to 3rd World Peoples’ struggles in that they have “darker skin” like him?

Does Obama distrust the lighter-skinned, more “European”-looking Israelis and tend to favor the “darker complexioned” Palestinians and other Arabs (al Qaeada? [sic]) because his Muslim African father and cousins?

Obama’s father was raised as a Muslim but was not a practicing Muslim as an adult. He was either agnostic or an atheist. He left Obama and Obama’s mother when Obama was two years old. Obama has said he has never worshipped in a mosque–which would mean he is not a former Muslim. And he has recently moved to demonstrate his pro-Israel credentials.

The email is not just anti-Obama; it’s racist: “Will his election in America temper or EMBOLDEN the 3rd World Terrorist Groups he physically resembles around the world?”

This missive clearly is directed at Jewish American voters. It calls on the “pro-Israeli lobby” to investigate Obama: “He DOES have Muslim roots, you know! Is he a Trojan Horse for anti-Israeli interests? Maybe the American Jewish community ought to THINK about all that.” The email adds, “We already KNOW the Clintons are pro-Israeli.”

Bill Burton, an Obama spokesman, says that Obama campaign was unaware of the email until Mother Jones asked about it. And the campaign issued a statement: “This is the latest in a string of outlandish and false attacks against Barack Obama. Obama has a strong and consistent record of speaking out for and voting for economic and security assistance for Israel because he believes in a strong U.S.-Israel alliance.”

The note yields no clues as to who’s behind it. For what it’s worth, it does seem to encourage American Jews to vote for HIllary Clinton instead of Obama. But there’s no telling what that says about its origins. (Could someone be trying to make the Clinton camp look bad?) But it’s another sign of how easy it is for political dirty tricksters to spread malicious and untrue innuendo. Should Obama become the Democrats’ presidential nominee, he can expect a flood of similar attacks. In the meantime, the unknown author of this email says, “We’re putting [the tape of Obama at the South Carolina church] up on YouTube.” So far, nothing is there.