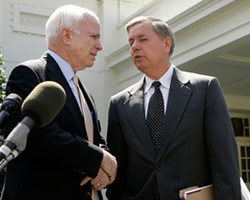 Even though Lindsey Graham has been replaced by Joe Lieberman as John McCain’s number one sidekick, he’s still spinning away for the Arizona Senator.

John McCain commemorated tax day by delivering a speech that boosted his promises of tax cuts to absurd levels. Lindsey Graham commemorated it by writing an op-ed in the Greenville News that claimed Americans’ uneasiness with the economy stems from their worry that the Bush tax cuts for the wealthy might not be made permanent by Congress. Seriously.

[Tax cuts were] the right medicine for an ailing economy and the results were clear. By lowering taxes, the federal government spurred economic development and actually collected more in tax revenue. […]

I believe some of the uneasiness taxpayers feel today about the economy is driven by concerns they are going to be hit with huge tax increases when the tax cuts expire.

I’d venture that Americans’ “bitterness” probably has more to do with the declining manufacturing base, lost jobs, stagnant wages, the housing crisis, the weakening dollar, and the rising cost of gas and health care. Think Progress has all the links you could want on that stuff. They also point out that the first paragraph in the Graham quote above is incorrect. When you lower taxes, you don’t bring in more tax revenue. Republican candidates always claim that the secret to paying for new programs (like a 100-year occupation) is to cut taxes, stimulate the economy, and bring in more federal funds as a result. Not true, says anyone who knows anything about the economy:

Treasury Secretary Henry M. Paulson: “As a general rule, I don’t believe that tax cuts pay for themselves.”

TP has sourcing and more quotes.