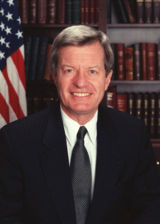 Montana Senator Max Baucus, head of the Senate Finance Committee, has rightfully been called “one of corporate America’s favorite Democrats.” It’s no surprise, then, that he’s all lobbied up.

Take Jeff Forbes, for example. In 2003, Forbes was Baucus’ lead staffer on the Senate Finance Committee working extensively on the Medicare prescription drug bill. Baucus, then the top-ranking Democrat on the panel, was one of the bill’s central architects.

In late November, just five days before the Senate took the final, key vote on the bill, Forbes quit. Six weeks later, he was registered to lobby for two drug companies and the Pharmaceutical Research and Manufacturers of America (PhRMA), the lobby representing the nation’s biggest prescription drug companies.

Those same companies got a multimillion-dollar windfall in the Medicare drug program, critics of the program contend, because the law forbids the government from negotiating with drug manufacturers for cheaper prices.

The Nation reported in 2007 that Baucus once asked 50 lobbyists to raise $100,000 each for his upcoming re-election campaign. If Barack Obama becomes the standard-bearer of his party, he’s going to have to decide if, in his quest to cleanse the system in Washington, he wants to demand change from powerful members of his own party.