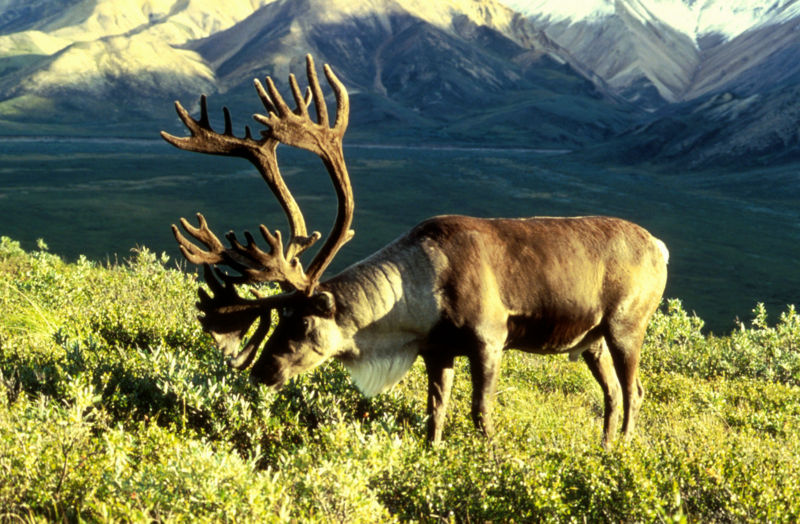 Fewer caribou calves are being born and more are dying as a result of a warming climate. The problem is timing. Peak food availability in West Greenland no longer corresponds to the peak time of caribou births, according to a study by Eric Post of Penn State. Throughout the Arctic winter, when there is no plant growth, caribou dig through snow to find lichens. In spring they switch to grazing on newly growing willows, sedges, and flowering herbs. As the birth season approaches, cued by increasing day length, they migrate to areas where newly-emergent food is plentiful.

But the routine that’s worked for millennia is faltering because caribou are unable to keep up with accelerated plant cycles tied to global warming. Now when pregnant females arrive at the calving grounds they find plants that have already reached peak productivity and are declining in nutritional value. The plants initiate growth in response to temperature, not day length (unlike the caribou), and are peaking dramatically earlier in response to rising temperatures. “Spring temperatures at our study site in West Greenland have risen by more than 4 degrees Celsius (7.2 degrees F) over the past few years,” said Post. “As a result, the timing of plant growth has advanced, but calving has not.”

The phenomenon is called trophic mismatch and is a predicted consequence of climate change. Trophic mismatches have been documented in birds. The most famous example being the study on Dutch birds and their caterpillar prey highlighted in Al Gore’s film An Inconvenient Truth. “Our work is the first documentation of a developing trophic mismatch in a terrestrial mammal as a result of climatic warming,” said Post. “And the rapidity with which this mismatch has developed is eye-opening, to say the least.”