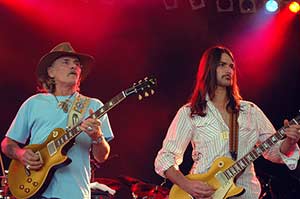 I’d love to attend the upcoming RNC and DNC, if nothing else just to watch the live music performances; and yes, this makes me a geek. Despite several lineup reports, when I called event planners today to confirm, my call to the DNC went straight to voice mail and folks at the RNC said to call back next week.

Until then, I’m going by a scattered reports from the interwebs:

DNC lineup: Punk band NOFX will allegedly play its album Punk In Drublic in its entirety, and the Mighty Mighty Bosstones (who knew they were still a band?), My Morning Jacket and the Black Keys are supposedly performing throughout the weekend. The Allman Brothers (keepin’ it old school, I guess) are supposed to be closing the event.

Elsewhere in Denver the same week: Sounds like the real DNC action might be three miles across town at the Denver Coliseum, where Rage Against the Machine will team up with Iraq Veterans Against the War and Tent State University to perform at the “Tent State Music Festival to End the War.” Also at coliseum will be the Flobots, The Coup, State Radio, and Wayne Kramer, who played during the riotous 1968 DNC in Chicago with MC5. I know where I’d be hanging out. As suspected, Dave Matthews Band and Bruce Springsteen may also be performing during the convention.

RNC lineup: On the hush-hush, or so they tell me. But I know folks like Jackson Browne and John Mellancamp will definitely not be showing up.

Elsewhere in Minneapolis the same week: Rage Against the Machine (again?) will perform at a Target center in Minneapolis for $60 a pop. Rage guitarist Tom Morello will also do some sideshows with country/guitar guy Steve Earle. Even Vieux Farka Toure will be in town, also.

How it stands up to 2004: Four years ago, country act Brooks & Dunn did their thing at the RNC in New York, along with rock band Dexter Freebish, gospel singer Donnie McClurkin, Christian singer Gracie Rosenburger, and country singer Darryl Worley.

Among many entertainers at the DNC in Boston four years ago, the Kwong Kow Chinese Drum Ensemble performed, as did Mavis Staples and Willie Nelson.