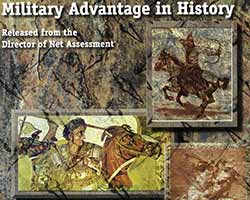 In the summer of 2002, the Pentagon’s Office of Net Assessment (ONA) published an 85-page monograph called “Military Advantage in History”. Unusual for an office that is headed by Andrew Marshall, the Pentagon’s “futurist in chief,” the study looks back to the past—way back. It examines four empires, or “pivotal hegemonic powers in history,” to draw lessons about how the United States “should think about maintaining military advantage in the 21st century.” Though unclassified, the study was held close to the vest; a stamp on the cover limits its dissemination without permission. Mother Jones obtained it only through a Freedom of Information Act request. Though the report is far from revelatory, it provides a window into a mindset that unselfconsciously envisions the United States as the successor to some of history’s most powerful empires.

The study looks a little like a high school text book, devoting chapters to Alexander the Great, Imperial Rome, Genghis Khan, and Napoleonic France and citing texts by Sun Tzu, Livy, and Jared Diamond. It attempts to break down exactly how historic empires sustained their military might across continents and even centuries. The study posits that the historical examples offer “insights into what drives U.S. military advantage,” as well as “where U.S. vulnerabilities may lie, and how the United States should think about maintaining its military advantage in the future.” There is no one secret to world domination, however. The Mongols’ military advantage was rooted in their “tactical and operational superiority”; the Macedonians’ in the “exceptional leadership” of and “cult of personality” surrounding Alexander the Great; Napoleon’s in “innovative operational concepts” and “information superiority”; and the Romans’ in “robust tactical doctrine” and “strong domestic institutions” which were “designed to incorporate conquered peoples as the empire grew.” In an extraordinary passage, the study cites the Roman experience—from over a millennium ago—as a precedent for America’s long-term dominance: “The Roman model suggests that it is possible for the United States to maintain its military advantage for centuries if it remains capable of transforming its forces before an opponent can develop counter-capabilities. Transformation coupled with strong strategic institutions is a powerful combination for an adversary to overcome.”

The report’s language is jargon laden and opaque—a lance used by Macedonian horsemen is referred to as a “primary weapon system.” That may be due to the methodology of “net assessment,” a fancy term for the ONA’s approach to analyzing complicated real-world situations that is rooted in systems analysis and game theory. Military author James Dunnigan compares it to engineering. “You take apart historical events, reassemble them as a simulation, and then tinker with the simulation until you can recreate the historical event accurately,” he explains. “What that allows you to do is play out ‘what if?’ situations: What if Napoleon did this? What if Ghengis Khan did that?”

While the study was produced under the auspices of the ONA, its five authors work for government intelligence contractor Booz Allen Hamilton, and they wrote the study as part of a contract for the Defense Department’s Information Assurance Technology Analysis Center. Booz Allen won a 10-year, $200 million cost-plus contract to establish and “host” that center in 1998. (In May, the Carlyle Group announced it will be taking over Booz Allen’s government services arm.)

The original idea for the study predates the Bush administration. Mark Herman, the Booz Allen vice president and war-game designer who is the study’s lead author, recalls being asked to give a presentation on historical empires at one of Andrew Marshall’s famous “summer studies” at the Naval War College in Newport, Rhode Island, in 1999. At that annual retreat, experts from government, academia, and beyond are invited to contemplate a big-picture question. Newt Gingrich, for example, participated in the 1999 program, according to Herman. He says that the ONA “liked the presentation so much they felt it should be written down” and expanded. A earlier version of the report, titled “Sustaining Military Dominance: Examples From Ancient History,” was presented at the 2001 summer study and was later cited in a Maureen Dowd column. The current version was published a year later.

Coming out of the Office of Net Assessment, the study’s theme of military transformation is not surprising. Described by the Washington Post as “an obscure but highly influential unit,” the ONA was established as an in-house think tank in 1973. Its founding director was Marshall, a strategist who achieved demigod status in the press after years of colorful profiles portraying him as a visionary. (A 2002 article in the New York Times Magazine named Marshall the “Yoda of the Rumsfeld Defense Department”; William Safire dubbed him “the freshest mind in the Puzzle Palace.”) ONA specializes in trend spotting and forecasting military threats. The office spent the 1980s exhaustively studying the US-Soviet balance; recently, it has turned to topics as diverse as neuropharmacology, Islamic warfare, and the national security implications of climate change.

Now in his 80s, Marshall has been a chief proponent of the so-called Revolution in Military Affairs, a cause also championed by Donald Rumsfeld that emphasizes speed and increased use of precision weapons and advanced communications technology. In 2001, Marshall was given a high-profile assignment by Rumsfeld to conduct an extensive review of the military and the possibilities of military transformation.

Most striking is how the study conceives of the United States in imperial terms. “You’ll see some neoconservatives at the beginning of the Bush administration crowing that ‘we do have an empire, let’s just come out of the closet and say we do,'” said Ivan Eland, the author of a book on America’s “informal empire” and the director of the Center on Peace & Liberty at the Independent Institute, on hearing a description of the study. “But the administration never did that because empire doesn’t sell well with the public.” After reviewing the study at Mother Jones‘ request, William Hartung, director of the Arms and Security Initiative at the New America Foundation, said he was struck by its “arrogance and immorality.” “The presumption that the United States should rule the world, sword at the ready, for the foreseeable future is an unacceptable basis for a just, even-handed foreign policy.”

Even coming from an office vaunted for its intellectual seriousness, “Military Advantage in History” often reads like it was meant as window dressing for the Revolution in Military Affairs agenda—sometimes at the expense of historical fact. (Herman says that the theme of transformation emerged naturally from his research.) After reviewing a section that identifies five discrete “transformations” of the Roman military over a period of 1,000 years, Lee Brice of Western Illinois University, president of the Society of Ancient Military Historians, described it as “so completely incorrect as to be useless.” In general, Brice noted, “it is inappropriate to apply modern concepts of systems theory, doctrine, and strategy to ancient armies. That required a level of planning and centralization that simply did not exist.”

Eland speculates that a study like this would “get warped by the military-industrial-congressional complex into more money for weapons.” Furthermore, he says, it ignores the economic implications of military expansion. “The Office of Net Assessment is doing this to show, ‘Well, gee, these other empires transformed themselves, they were successful, we need to do the same thing,'” Eland says. “Well that’s going to cost big bucks, and that will cause economic overstretch. People say it can’t happen to us since we have such a big economy, but every empire has said that.” It is unclear how the study has been used; the Office of Net Assessment declined a request for an interview. Herman says only that “a whole bunch of [copies] went out to the government.”

The idea that contemporary society can or should try to find direct guidance in the past has been assailed by some historians. The American historian Bernard Bailyn wrote of “an obvious kind of presentism, which at its worst becomes indoctrination by historical example.” But the ONA study charges ahead, plumbing the past for contemporary lessons. An extraordinary color-coded table in the study’s conclusion attempts to literally “map” the historical findings to the United States with an eye toward “enduring dominance.” (See image above.)

Several historians who reviewed the study differed on its quality and meaning. Walter Scheidel, a Stanford professor of classics and the coauthor of a forthcoming survey of ancient empires, called it “a successful distillation of relevant information and scholarship complemented by very interesting systematic analysis.” Others found the scholarship to be shoddy and superficial. Pamela Crossley, a Dartmouth historian who teaches on the Mongols, described the chapter on Genghis Khan as mostly “an accumulation of popularly transmitted misconceptions.” She also noted the study’s “amazingly strange spelling ‘Chengis.'” Brice, the ancient military historian, said the text suffered from “an intense, myopic habit of wanting to make the ancient world fit into modern stereotypes.” He compares it with “much lower-undergraduate-level work.”