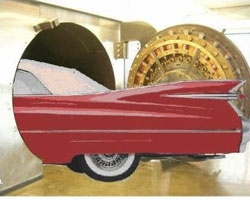 After digesting an abysmal November unemployment report, House Leader Nancy Pelosi (D-Calif.) is a “car czar” away from working out the kinks for a $15 billion auto Hail Mary, less than half the amount requested by the Detroit Three. This bridge loan will supposedly keep the auto industry running on fumes until March, when Obama’s pit crew can step in.

The numbers the automakers want are big to be sure, but not compared to those of the banking industry. Yet, Congress is transferring the caution they should have employed in determining the Troubled Assets Relief Program to the auto industry.

The American auto industry’s lifeline is less than a fraction of what it cost to bailout AIG alone. And no one from AIG had to face the Senate Banking Committee to get its $152 billion rescue package. Indeed, Senate Banking Committee Chairman Christopher Dodd (D-Conn.) thought that the automakers made a better case for federal help than the financial industry did. Of course, Wall Street had the Treasury Secretary and Federal Reserve Chairman batting for them, whereas the automakers were on their own. Unfortunately for auto execs, Detroit’s poor business model is far more transparent than Wall Street’s. With Wall Street, the lack of clarity helped bag the money.

So what’s the problem? Well, unless the economy turns around within the next three months or Americans spend their last bits of credit on D-3 cars, merely getting government loans and cutting expenses won’t be enough to stave off the next request for dough—way before March.

That’s why Sen. Richard Shelby’s (R-Ala.) question to the execs, “How are you going to pay it back?” was spot-on. So was the one about why the execs were only asking for $34 billion, rather than the $75 to $125 billion that the automakers said they’d ultimately need to avoid bankruptcy.

Bankruptcy is a scary thought. But there’s a scarier one: the dreaded, risky, murky, unregulated financial instrument known as credit default swaps. When GM’s CEO, Rick Wagoner, said, “there’s a significant amount of credit default swaps that would be triggered in a bankruptcy, in addition to credit lines with major institutions,” eyebrows raised.

Still, the only thing that will fix a cash flow problem is cash flow. Ford is considering the sale of Volvo, but the problem is a lack of buyers. Every car company is hurting. Every private equity company, even those that own car companies, is watching from the sidelines.

So, maybe the conversation in Congress should have centered on trying to figure out a way to make money out of existing inventory. If languishing vehicles are part of the problem, let’s make them part of the solution, too.

Subsidizing low-cost consumer driven purchases would move current inventory and pre-establish a set of buyers to switch into the new lines of more fuel-efficient cars when they come about. This would ensure present and future cash flow. Otherwise, layoffs, UAW concessions, not funding off-book health care plans, closing plants, and the fire sale of brands, just won’t plug the dam of losses. That said, trillions of dollars hasn’t stopped the fallout from Wall Street, either.