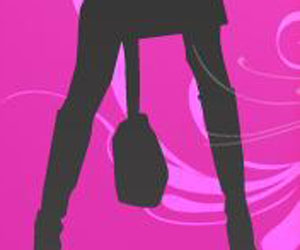 The hot pink press packet that arrived at the office promised that “Your boyfriend doesn’t need to know.” What doesn’t your boyfriend need to know? Well, that you eat chocolate, of course. That’s between you and your “chocolate finger,” as the marketing copy termed the two Twix-like bars being rolled out in the US by Mars under the name “Fling.” (The candy’s been out in Australia since 2007.)

In addition to tapping into the under-utilized market of paranoid heterosexual women whose eating habits are monitored by their boyfriends (it’s a well-documented fact that lesbians hate candy), Mars has shrewdly incorporated sparkles into an advertising campaign that relies heavily on women’s love for the color pink. (Fling’s website is a tidal wave of the color, punctuated with silhouettes of short-skirted, high-heeled Fling aficionados, one of whom appears to have a handbag falling right out of her vagina.) While it’s a given that women are more likely to buy things when they are pink, such as tools and cars, sparkles are oft ignored. It’s not just Fling’s website that sparkles, but the bar itself. “The shimmer,” reads the FAQ on Fling’s website, “is actually a [sic] FDA approved mineral called Mica, that shimmers and is used occasionally by specialty chocolatiers to add a unique and attractive sparkle to gourmet chocolate.” Popularly known as Vitamin S (for Sparkle), Mica is also used in makeup, and in toothpaste, where it acts as a mild abrasive that helps whiten teeth. Yum!

Predictably, one of the hot selling points for the Fling bar is that “at under 85 calories per finger, it’s slim, but not skinny. Indulgent but not greedy. Naughty but nice.” In other words, the candy perfectly straddles the contradictions of the angel/whore dilemma in a way its intended female consumers never will. The bars were even promoted in Australia with a 2007 television commercial in which a princess bids a morning adieu to her prince in what can only be read as a post-one-night-stand kiss-off, before shutting the door and gobbling up a Fling. “Forever is overrated,” warbles a flock of cartoon birds. While it’s tempting to embrace the commercial as a sign of society’s acceptance of sexually empowered women, it’s even more tempting to wonder why the only reason one ever sees a woman on-screen go unpunished for her libidinous ways is when someone is trying to sell women something. The commercial hasn’t been attached to any of the US marketing, but the ad copy is just as suggestive. The PR packages that went out to media outlets contained sheer T-shirts that read “Try It In Public,” equating the act of women consuming sweets in front of other people with being as taboo as committing sex acts in front of them. Couple this with the oppressive pinkness of the campaign, and one is left wondering when marketers will figure out that in order to make women buy things, they do not have to, literally, shove sparkles down their throats.