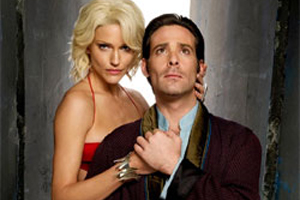 I’ll admit I’ve never been as much of a Battlestar Galactica fanatic as some people, even though I’m enough of a sucker for apocalyptic sci-fi that I stood in an opening-night line to see The Core. But even that skepticism wasn’t enough to prepare me for the pile of stinking silliness that was the show’s final episode on Friday night. Turns out the mystery song was a Google Map to the really real Earth, and God was directing them there the whole time through magic angels, or maybe demons, but whatever, their work here is done so they’re gonna go “poof” and let you guys go about mating with the natives and making more people who can eventually make more robots. And, scene. Questions that had seemed vital, propulsive forces to the show’s dramatic arc—What’s the deal with reincarnated Starbuck? Who are the secret Cylons and why are they there? How does this world intersect with present-day Earth?—were tossed aside with quick “God did it” explanations or comically deadpan titles: “150,000 years later.” Did the show bite off more than it could chew, or just crumple in the face of overwhelming expectations? And what could it mean for everybody’s other favorite sci-fi ensemble mystery?Lost has promised us one more season after this one, leading up to a “shocking” conclusion, and while they’ve assured us there will be no easy outs like “turns out they’re all in purgatory,” Battlestar Galactica‘s wrapup of its vaguely spiritual mysteries with “I’ve served my purpose now” magic-wand baloney makes me nervous. Even more so than its space-faring sibling, Lost has tangled itself up in unfathomably complex knots obscured by smoke monsters and magic numbers, and even recently, as the show has seemed to accelerate its answer-offering, these answers only seem to bring up more questions. Can Lost possibly give satisfactory explanations to enough mysteries to make it all worth it without giving the Smoke Monster a climactic speech where it tells each of our characters what they’ve learned, says “I’ve served my purpose now” and dissolves?

Look, willfully obscuring your plot can be great, and while I do like nice tidy answers, I’m happy to live with a couple mysteries. Witness the greatest movie of the past ten years, Mulholland Drive. I spent my first viewing awash in the Lynchy atmospherics without a clue about why Naomi Watts apparently switched characters halfway through, but after some reading (and the patient hand-holding of smarter friends) the puzzle-pieces came together. Of course, certain parts of the movie that seemed to demand explanations at first (the smoke in the room, the blue box) turned out to live happily without them, as cinematic flourishes or symbols with multiple meanings, but there were enough real, solid answers to keep me happy. Perhaps it’s a good sign that Mulholland Drive was originally supposed to be a series for ABC (can you freaking imagine?) and that they share creepy google-eyed actor Patrick Fischler. But if Lost tries to wrap things up by telling me “it was all just God’s plan,” I’m going to ask for these 60-odd hours of my life back.