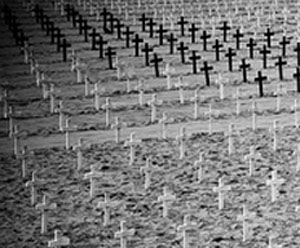 I remember vividly this night six years ago, which I spent huddled
around CNN with the rest of Salon’s News/Politics crew, watching the
deadly firefly light of missiles falling for the first time in the Iraqi darkness.

I don’t think any of us thought the Iraq War would last this long, though Mother Jones coverage proved awfully prescient.

Six years later, if you feel a sense of jaded anger coming over you when you consider Iraq’s current state, look instead at the burial photos of fallen soldiers, and the faces of the walking wounded, and let this archive of our Iraq War coverage remind you of what we know now and should have known then.